Review: Hold Me Until Midnight by Christina Phillips (Grayson Brothers #1) 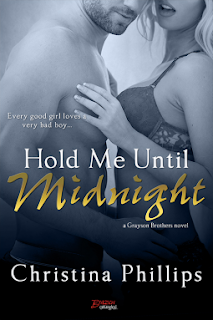 She may not be able to tell her father who he should or shouldn't marry but Scarlett Ashford refuses to be forced into being partnered at the wedding with the guy her soon-to-be stepmother has chosen for her. Getting a date isn't the problem; it's finding a guy who's able to fend off the unwanted advances of the guy her stepmother wants to be by Scarlett's side. Overhearing some people at the women's shelter she volunteers at, Scarlett decides to get the services of Jackson Grayson, known for the bodyguard and security services he and his brothers offer under the company they all co-own. When they meet for the first time, Scarlett knows he's perfect for the job, if only she can keep her attraction to him in check.

Having an abusive father and living in poverty while growing up has taught Jackson Grayson many things but he's not exactly sure if any of the lessons learned can help him get a grip on his reaction to Scarlett Ashford. She's lived the life of an heiress and he's more than aware that they don't belong together based on their social status alone. But being around her makes it difficult for Jackson to keep things professional and breaks one of the cardinal rules when it comes to their clients. What starts off as an one-night stand turns into something casual before it begins to feel like something much more than either of them planned. However, the powers that be don't think a bad boy and good girl should ever be together.

Hold Me Until Midnight is the first book in the Grayson Brothers series by author Christina Phillips and successfully introduces readers to the three Grayson siblings--Jackson, Alex, and Cooper--while giving us an entertaining and oh-so-hot love story focused on Jackson Grayson and Scarlett Ashford. This was a combination of two all-time favorite tropes of mine: bad boy falls for good girl (and vice-versa) and guy with an abusive and impoverished childhood and girl who grew up in the lap of luxury getting together. I liked that Jackson wasn't the usual poor-kid-makes-good-and-becomes-a-millionaire male lead because then it would be easy to lump him in with others with the same back story. Yes, he and his brothers have their own security business and they're doing well but not enough for them to belong in the pages of Forbes magazine. Scarlett matter-of-fact manner of speaking about her life and not complaining about it constantly was balanced nicely with her dedication to the women's shelter her late mother started.

One of my favorite things about this book was that it didn't feel rushed, thanks to the extended amount of time it took for Jackson and Scarlett's relationship to develop. No insta-love, though there was obviously a bit of insta-lust going on but then the latter is easier to believe than the former, at least as far as I'm concerned. The involvement of their respective families felt more like it was done out of concern than malice or greed, so definite bonus points for not going the much-used nefarious alternative. There's also a fair bit of levity involved so even though there are quite a few hot and heavy scenes between Jackson and Scarlett, their relationship also has it's share of laughs and I like that she's able to give as good as she gets, showing that she isn't seem meek socialite. I really did quite enjoy these two lead characters and their love story. Nothing was overly complicated nor overly simplified, creating just the right feel to make me a happy bookaholic. Hold Me Until Midnight raises the bar for the rest of the series and gets five stars! ♥

Pre-order Hold Me Until Midnight on Amazon | B&N | Kobo.