Review: His Touch by Patty Blount (Summer in New York #1) 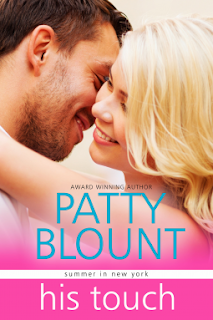 Being a single mother requires Kara Larsen to be on her game and to multitask when situations call for it. Losing her toddler Nadia twice in one day triggers her greatest fear, but it sparks unexpected anger from NYFD paramedic Reid Bennett, the man who finds her missing child both times. Humiliated by Reid's harsh reprimand, Kara can't seem to catch a break when Nadia begins to turn blue a few hours later and the responding team just happens to include Reid. Rushing Nadia to the hospital creates a bond of sorts between the two and soon enough, their paths seem to cross all around the city, making Kara wonder if her mother who died on September 11, 2001 could finally be sending her a sign in the form of Reid.

Woohoo! We finally get Kara Larsen's story! Kara was the one character from the multi-authored Christmas in New York series that had yet to have her story told, and she definitely made her mark on me in the fourth and final book, Goodness and Light, which I just discovered has a new title--A Match Made at Christmas. And now, Patty Blount, who wrote the aforementioned series ender that received a five-star rating from me, has written a poignant but hopeful story entitled His Touch, the first book in the new multi-authored Summer in New York series. All four authors have returned to weave new tales to tug at our heartstrings, and I don't think there could have been a more perfect beginning to this new series.

Kara Larsen and Reid Bennett first meet at a CPR class he's conducting, leaving Kara with a less than stellar first impression. Their next three meetings involve Reid rescuing Kara's daughter Nadia and while those first two rescues had Reid thinking that Kara was a careless mother, he quickly realizes that he may have been too harsh in his assessment of her mothering skills, especially when he sees how frightened and desperate she is when the third rescue involves a trip to the emergency room. Kara was abandoned by the father of her daughter while she was pregnant, but Reid's past holds on to a deep pain that he's never tried to deal with and one that led to his then wife divorcing him--the death of their young daughter Erin.

My heart couldn't help but break for both Kara and Reid--Kara for having so much on her plate and trying to deal with everything on her own and still hoping to receive a sign of some sort from her late mother and Reid for the loss that no parent will truly ever get over and for his need to seek advice from his late brother who also died during the September 11 attacks. With all the pain and heartache these two have had to deal with, you know that they're due for some peace and happiness in their lives. They're both believers in signs and the signs appear to have been there from the very beginning for them, but then sometimes, signs can be misconstrued, leading to decisions that cause even more hurt and further confusion.

It was easy to cheer these two on to their happily-ever-after and the fact that the road there wasn't an easy one for either of them made getting to the end even more meaningful. I was also happy that three of the four couples from Christmas in New York made appearances and that fans of that series see where all four of the couples are at in their respective relationships. That's the thing with these characters and stories--you become attached and invested, which is exactly what happened with Kara, especially in her sister Elena's story. If His Touch is a sign of things to come, then the Summer in New York series is one that will be worth reading from the first book to the last. Patty Blount has done it again. Five stars! ♥

Check out my five-starred review for Goodness and Light (aka A Match Made at Christmas).