Review: Hello, I Love You by Katie M. Stout 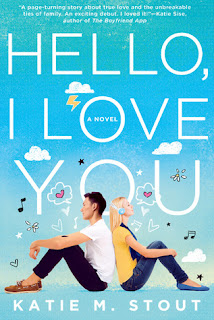 Grace Wilde needed to get away from things weighing on her in Nashville and while choosing to go to South Korea for her senior year in high school may have been done without having put a great deal of thought into it, she's just glad to be halfway 'round the world from her parents. Being the daughter of one of the most successful record producers in the music industry and the sister of a chart-topping country music star may appear to have its benefits but things have changed. She can't stand her mother blaming her for everything that's happened and she tired of her father ignoring anything that has to do with her.

The transition from all things American to being surrounded by the sights and sounds of an Asian country has Grace feeling overwhelmed, but her new roommate Sophie Bae is helping her navigate the ins and outs of Korean culture. As welcoming as Sophie has been, her twin brother is less accommodating, barely acknowledging her presence and making her feel as if she's a bother. When it turns out that Jason Bae is part of a very popular K-pop group and he asks for her help with a song he's writing, Grace finds herself back in the world of music and wondering if the feelings she has for Jason are as one-sided as she believes.

Hello, I Love You is a young adult (YA) romance debut novel from author Katie M. Stout. When I originally read the synopsis, I was immediately hooked because of my familiarity with the impact Korean culture has had on the world, especially here in my own country, the Philippines. I also know my fair share of Koreans, having been an English as a Second Language (ESL) teacher for three years. I'm going to admit that I was taken aback by the amount of ignorance the female lead character, Grace Wilde, had and how she seemed to have more bad than good things to say about Korea. I get that no country is perfect and that there are always negatives to go with the positives. Heck, just moving from one city to another can sometimes feel like culture shock. But for this girl to go to a foreign country, something she chose to do, and make a mockery of it most of the time is a bad reflection on western tourists, Americans in particular.

Grace didn't go out of her way to get to know the country or its people, waiting instead to go around and soak in the culture whenever Sophie forced her to. Also, there's a lot more to Korean culture than what was described in the book and while this may not be a travel book, Korea isn't merely about K-pop. That's like saying the United States of America is only about cowboys riding around on horses. I feel like that this could have been a great opportunity to show that two people from two different cultures can find common ground and build upon it in order to have a relationship. While music was the common ground for Jason and Grace, it felt too much as if she was trying to make him see that her way was better than his instead of them working together, and it became all about her. Sigh. Oh, and can I just point out that Filipinos ARE Asians and limiting that label to a certain skin color or eye shape is insulting to the rest of the Asian race.

I'm not saying the entire book was horrendous. The love story was actually okay and Grace's and Jason's respective tales of family woe were actually interesting, especially since they proved that they had more in common than just music. I wanted more of a resolution on the family front because it felt like we were all left hanging. Same goes for the Yoon Jae situation, but I didn't care as much about the whole love triangle thing than I did the family stuff. There's also a bit of a twist in the story, one that I figured very early on in the book, but one that explains why Grace felt the need to fly all the way to another country to get away from her family. However, she didn't really evolve all that much and she had over two hundred and thirty-eight pages to do so. I'm left feeling unsure about what rating to give Hello, I Love You and I dislike giving low ratings. :( I'd give the writing three stars and the story one star, so I'll give it an average of two stars. ♥