Review: Gambling on the Outlaw by Margaret Madigan (Nevada Bounty #1) 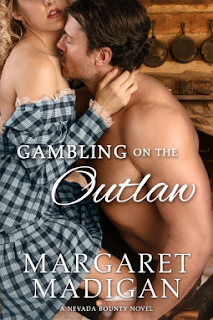 Beth Caldwell is a widow who owns her own home and land and works as a midwife in Nevada. She's been actively pursued by the town's local cattle baron, but she knows it has more to do with his wanting her land than having actual feelings for her. When she puts her foot down and publicly rejects him for the last time, she makes an enemy out of him. Taking in and caring for the injured man that some have claimed is a murderer and robber may make things worse for her, but she refuses to turn her back on him and she would rather he explain his circumstances than she listen to the accusations of corrupt men. But being with Isaac Collins stirs emotions that she buried along with her late husband, and now those very feelings may very well cost both her and Isaac their freedom and their lives.

Gambling on the Outlaw is the first book in the Nevada Bounty series by author Margaret Madigan and is a historical western romance about a feisty and independent widow named Beth Caldwell and a proclaimed outlaw named Isaac Collins. Both Beth and Isaac are what you would consider outsiders, she being a former gambler and he being a former hired gun, but they obviously have good hearts and simply want to be left to lead their lives quietly. When Isaac is accused by the local sheriff and the town's cattle baron of having been the man behind a train robbery that resulted in the murder of several people, including the brother of the cattle baron, he knows it's only a matter of time before they hang him for crimes he never committed. With revenge in his sights, he doesn't expect to find himself falling for the widow Caldwell, knowing there isn't much of a future for them, what with him running from the law. But if it's one thing that Beth is, it's stubborn and she'll do whatever is necessary to help Isaac.

When I was trying to recall the last time I read a historical western romance, I flashed back to some of the pocketbooks that are lined up on my shelves, and I recalled a couple of Sandra Brown's published works that I read in the early nineties and that I still consider some of my all-time favorites. It's been a good long while since then, but Gambling on the Outlaw brought back my love for the sub-genre. With a fine pair of lead characters who could hold their own yet feel incomplete without the other and three other women--Daisy, Nellie, and Lydia--who represented Beth's patchwork family and who piqued my curiosity, making me wonder if the books to follow will be about them, it was easy to become invested in wanting to see them get out of their situation happy and alive. Heck, even the antagonists were memorable and then there were those who were stuck somewhere in the middle.

This is not to say, however, that the book was merely character-driven. The story itself felt original and certainly veered away from what I've come to expect in historical western romances. After all, even if the general story line in a book is similar to those that have come before it, you want something new and creative to make it stand out and the author certainly achieved that here. There were a number of times that I thought the story was going to go one way, only to be pleasantly surprised with how Margaret Madigan veered in a different direction but did so in a manner that made the story even more of a worthwhile read. This really was quite an enjoyable book and I look forward to reading the rest of the Nevada Bounty series. I'm giving Gambling on the Outlaw 4.5 stars. ♥

Pre-order Gambling on the Outlaw on Amazon | B&N | Kobo.