Review: Forget Me Not by Erika Marks (Loveless & Dunn #3) 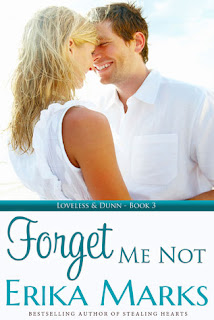 Note: This ARC was provided by Tule Publishing in exchange for an honest review.

Five years ago, Mallory Reynolds and Josh Loveless were very much in love and had big plans for their lives. When Mallory tells Josh that she's decided to go to New York to attend a writing program at NYU, she doesn't get the reaction she quite expects from him. Josh has a surprise of his own, a ring in his pocket, but he doesn't get to propose, knowing that he can't go with her to New York since he plans on opening his own business in Magnolia Bay. He abruptly ends things with her, telling her that they obviously want different things in life. She begs him to give their relationship a chance but he refuses and she walks away.

Five years later, Mallory Reynolds finds herself back in Magnolia Bay, needing to get away from the press when she's unwittingly unmasked as the author behind a highly popular erotica series of books written under a pen name. People in their small town think that the books are about her and Josh, but she insists that it's all purely fictional. Mallory knows Josh is embarrassed but she'd also like a second chance with him, even though their lives went on after the breakup. Will she be able to show Josh that she's still the same girl he fell in love with years ago, and will Josh be able to trust her with his once-broken heart again?

Forget Me Not is book three in Erika Marks's Loveless & Dunn series and shifts a little from the original set of siblings from the Loveless and Dunn families to Josh Loveless, cousin to Knox Loveless, lead male character from book one, and his ex-girlfriend Mallory Reynolds. This is a second chance romance about two people who were once in love but parted ways when what they wanted in life proved to be too far apart to further pursue their relationship, at least from Josh's perspective. They both wanted to pursue their dreams and both expected the other to be by their side on the journey. Sometimes, being apart allows people to grow and discover more about themselves and make the necessary changes to their lives.

When they meet again, Mallory is a successful author after her identity is exposed in connection to bestselling erotica books and Josh is re-launching Extreme Sports, his business catering to outdoor adventures and pursuits. Mallory can see the changes in Josh and his less than warm welcome underline the fact that he would rather be as far away from her as possible. But sometimes, it takes a bit of prodding and pushing from those around us to see that maybe some things and some people are worth taking a second chance on. As was the case with the first two books, family plays an important part in the story and a bit of meddling and matchmaking never hurt. Forget Me Not was a lighthearted read and gets 4.5 stars. ♥

Purchase Forget Me Not on Amazon.