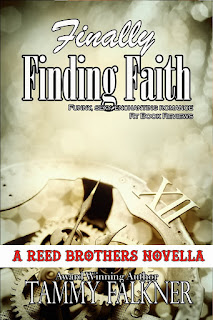 Note: This ebook was provided by Night Shift Publishing via NetGalley in exchange for an honest review.

Daniel has a list of things he'd like to complete before the new year is welcomed in New York. He's checked the first one off--get a tattoo--and has decided to see if the last one--get his heirloom watch fixed--is doable. It stopped working after an explosion left all of his men dead and him without a leg and with injuries. By the time the clock strikes midnight on New Year's, Daniel plans to be with his men...but he never planned on meeting Faith.

Faith sees how wounded Daniel is, and not just based on the fact that he's a veteran with a prosthesis. He looks lost and doesn't believe that he'll ever be found, especially since he has no one left in his life. They decide to spend the day together and work on Daniel's list but forging a kinship that neither of them expected. When their day ends, will Daniel be able to finally find what he's looking for or will he be ready to meet his self-imposed deadline?

Finally Finding Faith is a novella in the Reed Brothers series by Tammy Falkner and is to be read after book three. The male lead character, Daniel, meets some of the Reeds while getting a tattoo at their shop, while female lead character Faith knows the family and even had a crush on the youngest brother, Pete. She's also the daughter of Henry, the doorman at Emily's apartment building and someone who was introduced in the second book. Daniel and Faith notice each other as soon as they meet in the watch repair shop Faith's family owns. Their connection is solidified even though they're only together for less than twenty-four hours. Faith is as much a survivor as Daniel, having gone through her own loss, and I liked how she was able to show him things from a different perspective without being in-your-face about it and not pressuring him into anything.

This novella is a love story but has an underlying lesson about faith and hope, and I'm not talking about faith in terms of religion. We can all empathize with that feeling hopelessness and helplessness when it's almost as if we've tried everything and we're still stuck with nowhere else to go because we've all felt that way at least once in our lives. It becomes obvious pretty quickly what "deadline" Daniel is moving toward, and it's made even clearer when he explains what happened to him and his men while Afghanistan. He doesn't come off as a desperate man; more of someone who has lost some sense of purpose and feels as if he doesn't deserve to have survived something that those who trusted him didn't. While a more serious tale compared to the the first four that were released in the series, there's still a bit of humor in it. Finally Finding Faith gets 4.5 out of five stars. ♥