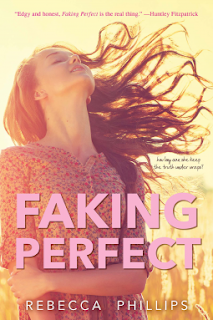 For a moment, all I could hear was the rustle of the leaves in the lilac bush and the occasional car on the road beside us. I was sure people were looking at us, intrigued by the teenage couple embracing in public for all to see, but I no longer cared about who might be watching or what they might think of me. For once, I was exactly where I was supposed to be.

Lexi Shaw puts on just the right amount of make-up to cover her freckles and other flaws and hangs out with the right group of friends. Her friends don't understand why she spends so much time with her neighbor Nolan Bruce, who just also happens to be her best friend. Her friends have no clue that she's had a crush on one of them, the too-perfect-for words Ben Dorsey. Her friends think her father is dead when, the truth is, Lexi has no clue since she and her irresponsible mother moved away fourteen years ago. But the one secret her friends don't know and, as far as Lexi is concerned, will never, ever find out is that she's been sleeping with Tyler Flynn, whose reputation is the reason she chose him to be her bed buddy and the same reason no one can ever know about their arrangement. However, secrets always have a way of coming out, and when the things she's been keeping from her friends come to light, Lexi will need to finally come face to face with the consequences of her actions and decide if the time's come to stop faking perfect.

Will the real Lexi Shaw please stand up? In Faking Perfect, a young adult (YA) romance from Rebecca Phillips, seventeen-year-old high school senior Lexi Shaw works hard to be the kind of girl her friends want to hang out and the kind of girl Ben Dorsey, the boy she's had a crush on since the tenth grade, will finally notice. There are things about her that she doesn't share with them, afraid that they'll take away the acceptance they've given her. With them, she's part of the higher echelon of their school's social ladder. They don't get how she could be friends with someone like Nolan Bruce and they have no idea that her mother tends to drink too much and forgets to pay the monthly bills on time. And then there's Tyler Flynn--the boy Lexi's sleeping with. No one can ever know about him because that's the kind of tidbit that could destroy a her standing with her friends, given Tyler's own troubled history and shady dealings. She can't get enough of him when they're together in bed, but can't get away from him fast enough afterward.

This is the kind of story that feels familiar, whether it's because we can empathize with Lexi or because we've come across the whole girl-pretending-to-be-someone-she's-not angle before, but there's something about it that makes it stand out. Countless teens want to fit in; heck, I can say the same thing about adults. Lexi doesn't necessarily lie but she doesn't tell her friends the truth of her circumstances, so what she shows them is all they get, making them think she's someone she actually isn't. She does slip at times and the admonishment she gets from two of her friends is often enough to make her want to try harder at being this supposedly perfect girl. As a reader, you know that truth is going to come out sooner or later, and I liked how the author decided to unveil it in the story plus how Lexi handled the aftermath. She does make certain choices in the book that you know, as a reader, she'll come to regret later on, but they also lend an authenticity to her, because that's how a lot of girls her age would handle those situations as well.

Ben and Tyler are a study in contrasts--the golden boy versus the bad boy--but they also exemplify that what you see isn't always what you get. When it comes down to it, one's true character is revealed in trying times and when you expect your knight in shining armor to come along, you realize that the armor is actually tarnished. These two boys are exactly that--tarnished--and Lexi's realization that she doesn't really know either of them as well as she thought she did, which tends to happen when we're stuck on some image we've created for someone, wholeheartedly believing that's who they really are and all they'll ever be. Then you have Nolan, who could have been used in the story in a way that many will expect, but whose purpose was refreshingly different. Same goes for Shelby Meyer, one of Lexi's friends who proved to be a cut above the rest of those Lexi was spending her time with. This had a good cast of characters, none of whom were even close to being the ideal teen or adult but somehow felt quite authentic and recognizable.

Lexi's journey to coming to terms with who she is and the facts of her life, both past and present, had its share of laughs and heartache. Her story is about the importance of accepting your true self and choosing to be with the people who accept you just as you are instead of putting together a facade that you feel is most appealing and pleasing to others. With the former, you may not get as many friends or have the popularity you seek, while with the latter, you may have all those but end up rejecting the you you're meant to be. I liked that the book was also about family and how even though Lexi's family wasn't as perfect as Nolan's, she was surrounded by people who loved and accepted her for who she was and that learning the truth about her father may have hurt but it also healed her. Faking Perfect is about Lexi falling in love, both with the guy who fit her best and with herself, and finding out that being real and embracing your imperfection is way easier than faking perfection. This 2015 favorite gets five-plus stars. ♥