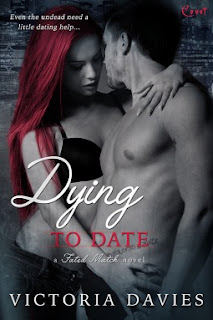 Vampires and necromancers don't mix. The latter have the ability to control the former, so a happily-ever-after between two people belonging to the two feuding supernatural races has never been encouraged. However, when Melissa Redgrave meets Tarian Drake, their match rating is the highest one that Melissa's ever experienced and a date is immediately set up. Of course, Melissa has no idea that Tarian is a necromancer. Their chemistry is off the charts, but a kidnapping that could lead to a war between the necromancers and vampires and Tarian's secret coming to light threaten to put a permanent end to their burgeoning romance and mating.

Dying to Date is book two in Victoria Davies's Fated Match series, stories of pairs that are perfectly mismatched by the matchmaking service but when fate intervenes, they'll realize they've found their ideal mates. Melissa Redgrave was introduced to readers in book one, Love at Stake, and now she finally gets what she wants: a membership with Fated Match. When she's paired up with Tarian Drake, the fact that he doesn't disclose his species may seem like a red flag but Melissa doesn't think too much of it. There's a definite connection between the two of them, something that's been there since they first met in the reception area of Fated Match. Reality bites when Melissa discovers that Tarian is a necromancer and she can't help but wonder if his dating her has something to do with her being the kidnapping victim of Tarian's relatives.

While this second novel shares the humor and drama of the first one, this also includes a fair amount of action and a bit of suspense as well, thanks to the whole vampire-necromancer feud. Abbey Sinclair and Lucian Redgrave may have had to overcome their own personal hang-ups when it came to them actually and officially becoming a couple, but Melissa and Tarian were up against the prejudices their respective races had against the other. Even though, based on the dictates of those around them, they shouldn't even be together, these two were perfect for each other. They were sweet but intense and the whole Romeo and Juliet vibe is something I've enjoyed in modern-day books for as long as it's pulled off well and that it still has its own creative twist to it, which this book  most certainly did.

The general concept for the series is deceptively simple--supernatural beings searching for mates--but there's been a complexity to the two books so far. These are pairings that do not fit the norm and there are quite a number of failed potential pair-ups before they actually find the person they're meant to be with. There's nothing ordinary about either of the books and it appears that things just keep getting better from one book to the next, leaving me with no other choice but to raise my expectations for the third book, which I'm looking forward to reading whenever it'll be released. ^.^ So far, so good, Victoria Davies! Dying to Date gets 4.5 stars out of five. ♥