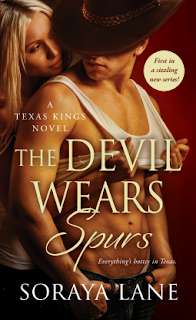 Ryder King isn't like his two older brothers but he's made a name for himself in the world of rodeo and is willing to take a risk or two whenever the occasion calls for it. On a high ever since his return Texas, Ryder makes the mistake of betting his share of the family-owned homestead and losing to a longtime family foe. When Chloe Rivers offers to help him win it back in exchange for his paying her tuition to law school, Ryder and Chloe make a pact to work together until their plan comes to fruition. They both know the stakes are high but neither of them realized they would end up gambling with their hearts as well.

The Devil Wears Spurs is the first book in the Texas Kings trilogy, which is a series of books about the three King brothers, Nate, Chase, and Ryder, from Soraya Lane. Ryder King's return to Texas is marred by an overly confident wager while playing poker. Now, he puts his fate in the hands of the very girl who captured his attention at his last rodeo ride--Chloe Rivers. The fact that she may not look like a gambler works to her advantage but she learned the tricks of the trade at her father's side, the same father she no longer wants anything to do with. At the end of their deal, both Ryder and Chloe will walk away with exactly what they want, until things change between them.

This was quite a delightful read, with a story that I've never come across before, one that included something I didn't expect in chapter twenty. Ryder may have initially reminded Chloe of her father, no thanks to that one ill-thought poker bet, but I loved reading about how she was able to see that there was more to him than the privileged risk-taking cowboy he appeared to be. Theirs was a playful but steamy romance, one that had a fair amount of flirtation and frustration on both their parts. These two were a great couple and while they were there to help each other out--Chloe with getting back Ryder's share of the land and Ryder with paying for Chloe's tuition--they were also able to be there to support one another when it came to family issues. This was definitely a relationship that was give and take and one that was based on love and trust and not just on lust.

Aside from giving readers an enjoyable love story between Ryder and Chloe, we're also introduced to the other King brothers and are able to have an idea of their personalities. They're three different men but all share a love for family, especially when it comes to their ailing grandfather. They're also quite protective of non-family members who are welcomed into the fold, such as with the case of Chloe. Based on this first book, I look forward to the next two books in the trilogy and will keep my fingers crossed that Nate and Chase are just as swoon-worthy as their youngest brother Ryder. If you love a good cowboy romance, I suggest you check out The Devil Wears Spurs by Soraya Lane, which I'm giving four stars to. ♥