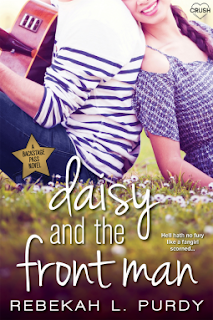 A date with her favorite member of her favorite boy band would be a dream come true for any girl but it soon becomes a nightmare for Daisy Morris, no thanks to Seconds to Juliet's Trevin Jacobs standing her up the night of her homecoming dance. Daisy is beyond humiliated and the adoration she once had for Trevin and all things S2J has crumbled. If only she could make him feel even a smidgen of her embarrassment...and then her mother informs her that she'll be spending her summer on tour with her father, the very same father who just happens to be one of the bodyguards for Seconds to Juliet.

When Trevin meets Daisy, he has no clue why she seems to hate anything and everything about him. Saying yes to a bet requiring him to make her fall madly in love with him gives him the perfect excuse to get close to this girl that fascinates him while reaping the reward of getting to work on a song with any artist should he win. The more time they spend together, the more they see that there's more to one another than they originally thought. But will their growing feelings be enough for Trevin to call off the bet or will it be too late for Daisy to realize that revenge isn't as sweet as you thought it would be?

Daisy and the Front Man by Rebekah L. Purdy is the third book in the multi-authored young adult (YA) romance Backstage Pass series from the Crush imprint of Entangled Publishing and turns the spotlight on Trevin Jacobs, a member of the mega-famous pop boy band Seconds to Juliet, and Daisy Morris, just your regular girl with her mind focused on revenge. Trevin enjoyed some trappings of being the star that he was, but his family was still a touchstone for him and he took the responsibility of watching over his four fellow S2J members seriously. He wasn't the cocky, self-important guy that Daisy assumed he would be, but the girl was bent on making him pay for the humiliation she suffered. I'll admit that it took me a while to like Daisy but I totally get why she was being bitchy. If we're being honest here, countless girls wish they could get back at some guy who broke their heart, and in Daisy's case, the opportunity to do so presented itself. Still, I found myself shaking my head at her stubbornness and immaturity when it came to her whole situation with Trevin and the poor guy was absolutely clueless to the whole vengeance thing.

I liked that this story had the lead female character hating the lead male character, giving it a different feel from the first two books in the series. The various schemes Daisy and her best friend would come up with as part of the whole get-revenge-on-Trevin plan were a mix of deviousness and silliness, never making you doubt that these were teenagers you were reading about. There's a lot of humor with just a hint of angst when it comes to the love story itself, but I did find the family issues both Trevin and Daisy were dealing with as stuff other teenagers could relate to and same goes for anyone who's ever experienced having a parent not understanding the dream their child is pursuing or having parents who are separated or divorced and not being able to spend time with their child or making promises only to have them break both the promises and their child's heart later on. So, this wasn't simply a YA novel about two teens who fall in love but it was also about learning that what we think is true may not always be so. The Backstage Pass series continues to bring a smile to my face. Daisy and the Front Man gets 4.5 stars. ♥

Pre-order Daisy and the Front Man on Amazon | B&N | Kobo.