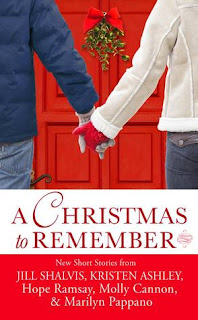 A Christmas to Remember is a collection of holiday short stories from authors Jill Shalvis, Kristen Ashley, Hope Ramsay, Molly Cannon, and Marilyn Pappano. Each of the stories is part of a series and individual reviews can be found below. While it isn't Christmas at the moment, the stories are ones that will put a bit of love and hope in your heart. The book as a whole gets 4.5 stars. ^.^

When firefighter Ian O'Mallery is called to a fire at the building where the girl who broke his heart lives, he rescues Melissa Mann and sits by her bedside as she regains consciousness. Realizing that Ian is the only man she wants to be with has Melissa coming up with a plan to win him back. But could she six months too late?

Shockingly, this is the first Jill Shalvis story I've ever read. Yes, I admit it. Feel free to pelt me with paperbacks. I'm a bit embarrassed but I will say that I have her Lucky Harbor series on my TBR list and know that I've read this short story about Ian and Melissa, I realize I seriously need to work much harder on cutting down my list by several dozen...and soon!

This was short but sweet and I didn't feel as if I was missing anything, even though I'm not familiar with the series at all. I'm a sucker for a story that includes a dog, so definite bonus points for that. I love it when a story as short as this one packs a punch and doesn't leave you wanting. I'm giving Dream a Little Dream by Jill Shalvis five stars. ♥

Every Year by Kristen Ashley (Chaos #2.5)

Tabby Allen wants her biker boyfriend Shy Cage and his brother Landon to have the kind of Christmas they haven't had in years. With the help of her family, Tabby hopes that the sadness that have followed the Cage brothers since the murder of their parents will finally dissipate and they experience the true meaning of the season.

I'm going to make a confession here: I bought the anthology when it first came out in December 2013 and immediately read this short story from Kristen Ashley. It was the one story that I was itching to read because it was part of the Chaos series and because I loved Shy and Tabby. I finally went ahead and read the rest of the stories because I realized that I was going to post a review on the newest release in the Chaos series and wanted to be a good bookaholic an post a full review on this anthology first. ^.^

This was a beautiful and touching addition to the series and puts into perspective just how much heart these bikers truly have. The humor that's synonymous with Kristen Ashley's books is very much present and there's just enough tugging at your heartstrings to make you teary-eyed. And that part where gifts were being exchanged was the absolute highlight. Every Year by Kristen Ashley gets five stars. ♥

Maryanne Carpenter has nowhere else to go. Her cousin is her last hope in finding a place for her and her baby boy to stay for a while. When she ends up in a barn with a man shining his flashlight down on her, Maryanne doesn't know if her luck has finally run out or if Daniel Jessup may very well be the Christmas miracle she never expected to get.

As is the case with Jill Shalvis, this is my first Hope Ramsay story and one that I liked reading. I did feel somewhat rushed in terms of the characters developing feelings for one another and it was also as though I was left hanging a bit at the end of it. Still, it's a feel-good story that leaves you believing in the power of love and of Christmas. A Christmas to Remember gets four stars. ♥

Have Yourself a Messy Little Christmas by Molly Cannon (Everson, Texas #0.5)

Lincoln Jones opens the door to a woman dressed as an elf who declares that she's a present from his mother. Dinah Mason is a professional organizer who looks forward to the challenge the obviously messy Lincoln presents, but the greater challenge may prove to be keeping her feelings for him under wraps.

This is a prequel to yet another series I have yet to read, but based on the short story alone, it appears to be quite an interesting one from Molly Cannon. The disorganized Lincoln and the organized Dinah may not have hit it off in the beginning but there was chemistry between them. I liked the humor that was there all throughout and finished the story with a smile on my face. Have Yourself a Messy Little Christmas by Molly Cannon gets 4.5 stars. ♥

A Family for Christmas by Marilyn Pappano (Tallgrass #1.5)

Dr. Jared Connors is the newest doctor in Tallgrass and has signed on for two years. He still hasn't gotten used to the small town and finds himself missing his home in New York. However, meeting widow Ilena Gomez and her son may very well be the incentive he's been looking for to finally plant some roots.

Yes, yes. I admit it. I haven't read this series yet but I did enjoy this short story from the author. There were moments that I felt were missing and there was one particular point that had me expecting one thing to happen but found myself taken completely by surprise instead near the end. My heart broke a little for Jared in the last chapter because I did agree with his assessment that Ilena didn't consider him worthy enough to make changes for. Still, a pretty good story with a tiny bit of angst. A Family for Christmas by Marilyn Pappano gets four stars. ♥

Purchase A Christmas to Remember on Amazon | B&N | Kobo.