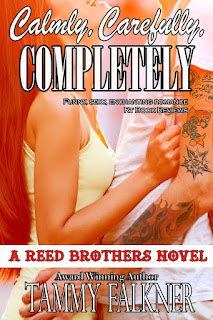 Note: This ebook was provided by Night Shift Publishing via NetGalley in exchange for an honest review.

More than two years ago, Pete Reed offered Reagan Caster the assistance and support she needed after a brutal and traumatizing event in her life. After that night, they never saw each other again...until Pete is released from prison on parole and is tasked to help troubled and hearing-impaired kids and teens at a farm and finds himself face-to-face with Reagan, the girl he's thought about every day for over two years.

Reagan Caster's life changed forever after one dark and desolate night but she's never forgotten the one bright light from that nightmare--Peter Reed. She wants to be able to thank him, but now that he stands before her, she finds herself drawn to him in a way that both confuses and exhilarates her. Her instincts tell her that Pete isn't like other guys, but is she ready to entrust him with both her heart and her body?

Calmly, Carefully, Completely is the third full-length book in the Reed Brothers series by Tammy Falkner and focuses the spotlight on the youngest Reed brother, Peter (aka Pete), and his love story with Reagan Caster, a girl he briefly met shortly before he was arrested and put in jail, the events of which can be read in book two (the getting arrested and going to jail part). The events here occur after Pete has been released on parole and he and Reagan meet again while both helping out at a youth camp. That one moment together more than two years ago has stayed with them and they find themselves with more than a passing attraction. But with both their pasts and Reagan's dad threatening to castrate anyone who comes near his daughter, Pete and Reagan realize that they've got a lot of hurdles that they'll need to overcome.

Pete and Reagan getting to their happily-ever-after is neither easy nor drama-free, especially as they tried to deal with the aftermath of Reagan's sexual assault,  but there is still a great deal of the humor that readers have come to expect from this series, especially coming from Pete's brothers and Reagan's father. While the feelings between them seemed to escalate pretty quickly, something which appears to be a thing with the Reed boys but then I guess when you know, you know, I did like that the progress of their actual relationship was paced a gear or two slower. As always, I enjoyed the banter among the brothers because they make you feel that there's a genuine friendship that they all share and it isn't simply due to the fact that they're siblings. Calmly, Carefully, Completely was touching and entertaining and gets 4.5 stars. ♥