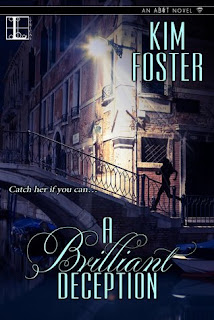 Cat Montgomery feels like she's ready to call it a day with as far as her thieving days go, but when her handler informs her that her next job has to do with the ring once belonging to King Richard I of England, also known as Richard the Lionheart and a familiar character in the Robin Hood legend, she finds it difficult to refuse. Who wouldn't want to end their career by bringing in one of the most fabled pieces of jewelry in history? But someone else wants the ring and when they beat Cat to the punch, she's forced to throw caution to the wind and get it back. Along with the two men who have occupied her mind and her heart, Jack Barlow and Ethan Jones, along for the ride, Cat's last escapade will definitely be life-changing.

A Brilliant Deception is the third and, what I presume to be, final book in the Kim Foster-penned AB&T series about professional thief Cat Montgomery, who has been with the Agency of Burglary and Theft for a number of years and appears to be prepared to finally retire. She chooses to take on the job of going after the legendary Lionheart ring but is faced with numerous obstacles. There's also more than meets the eye when it comes to the ring, plus the oh-so-elusive Fabergé egg is still very much in play in this installment.

As far as the rest of her life is concerned, Cat, Jack, and Ethan are all leading separate lives but fate has a way of intervening when it comes to these three and they remain intertwined, both personally and otherwise. I'm not sure what I can say about the ending since, if you've read my reviews for the first two books, you'll have an idea of what it may be based on my reaction. I suspect that it'll not everyone will be thrilled by it, but that's what tends to happen when there are two deserving guys vying for one girl's heart. Suffice it to say that my opinion of Jack was already high to begin with and it went up several notches here.

The twists and turns are amped up for this third book and you almost feel as if you want to catch your breath every now and again because it was as if one thing after another came Cat's way. This thieving mastermind has a way of stealing your heart, as is the case with Jack and Ethan and a few of the recurring characters in the series. If this is truly the end for the AB&T series, then it ended on a high, and I shall miss all things Cat, Jack, and Ethan. I'm giving A Brilliant Deception four stars and same goes for the series. ♥