Review: Blame It on the Kiss by Robin Bielman (Kisses in the Sand #2) 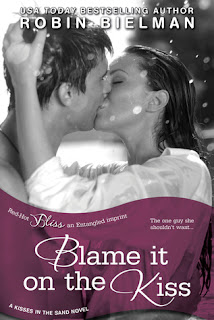 Before her best friend Payton passed away, Honor Mitchell promised her (twice!) that she would fulfill all five of the things on Payton's wish list. Just as she was about to check off one item on the list--have a one-night stand--Honor finds out the guy she locked lips with is none other than Payton's ex-boyfriend, Bryce Bishop. Things fizzled really quickly, but when they bump into each other in White Strand Cove months later, the attraction is still very much there. As much as Honor wishes she could avoid being around Bryce, she's left with little choice but to be around him since they're both in the bridal party for their best friends, Zane Hollander and Sophie Bishop. It's only three days and then she can walk away. How hard could it be?

Bryce was heartbroken when Payton ended things with him and finding out that she had died without telling him she was terminal made him wary of being that committed to another woman. He may be undeniably drawn to Honor but if she's anything like her best friend, he's pretty sure she'll break his heart if he gets too close. However, Bryce can't help himself and learning about Payton's list gives him the idea to help Honor accomplish everything written down in order to spend time with her plus to finally get the closure he wants regarding Payton's death. Being around Honor shows Bryce that maybe she's actually different from his ex-girlfriend and that what started with a kiss could actually lead into something more.

Blame It on the Kiss is the second book in the Kisses in the Sand series from Robin Bielman and brings about the story of Bryce Bishop and Honor Mitchell, best friends of the lead characters from the first book, Zane Hollander and Sophie Bishop from Keeping Mr. Right Now. When Bryce and Honor's paths crossed in book one, you could tell right away that there was a story there just waiting to be told and I'm glad that book two was about them. Bryce appears to be a straight-laced, intelligent, and career-driven guy but it was enlightening to see that he was also someone who believed in commitment and in happily-ever-afters. On the other hand, we get to know Honor, who was a good friend to Sophie and appears to have been a good friend to Payton as well. She's somewhat different from Bryce, not being the kind to really stick to something for long. The idea of these two somewhat opposites getting together was interesting, especially with the added complication of Payton being Honor's best friend and Bryce's ex-girlfriend.

The predicament that Bryce and Honor initially find themselves in--two people attracted to one another but connected by someone who has passed away and was one's best friend and the other's former flame--is one of the more thought-provoking story lines I've come across in quite a while. Would I have chosen to keep my distance or would I have decided to make a go of it? I liked that there was a great deal of hesitation because that's common and realistic reaction. It was better that they were cautious about pursuing anything between them because if and when they finally decide to do so, they knew it would be worth the risk and the still lingering feelings of guilt. I also liked how important family and friends were for Bryce and Honor, something they share in common with Zane and Sophie. Speaking of Zane and Sophie, I love how their story still played a part here but in a not-so-stealing-the-spotlight kind of way. I've become a fan of the series and can't wait to read Danny Ellis's story. Blame It on the Kiss gets five stars. ♥

Purchase Blame It on the Kiss on Amazon | B&N | Kobo.