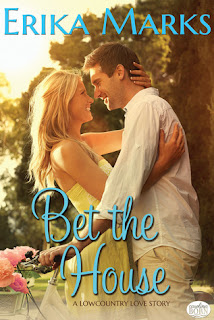 Willamena "Willa" Dunn has had her eye on her dream house, a historic bungalow, ever since she was a teenager. Finding out that the person who outbid her is none other than her nemesis, Knox Loveless, Willa is beyond frustrated. Isn't it enough that her youngest sister is set to marry the eldest of brother of the Loveless brood, the one family they consider a rival because of differing opinions on architectural building and conservation? But when Knox offers her an opportunity to be given ownership of the bungalow if she wins a bet, Will finds herself readily agreeing to the terms, thinking she can't lose.

Surprisingly, Willa begins to see a side of Knox she never thought possible, and the attraction she's always felt for him is stronger than ever, but she's keeping her eye on the prize, refusing to be distracted in her quest to claim the bungalow as hers. However, she can't seem to stop thinking about Knox and when they finally share a kiss, no one else seems to come close to making her feel the way he did. Will Willa be able to open herself to the possibility of finding something she never expected with Knox, or will her stubbornness and a too-long rivalry between their families stand in the way of love and happiness?

Bet the House is the first book in the Loveless & Dunn series by author Erika Marks and the stories revolve around the Dunn and Loveless families, though the pairings are not exclusively between the two clans, who live in the town of Magnolia Bay, South Carolina. This particular story is about Willa Dunn and Knox Loveless, sorta friends who somehow became sorta enemies and who sorta have feelings for one another but refuse to acknowledge the possibility of such feelings even existing. It appears that everyone else could see that the two were in love with each other, but they were blinded by rivalry and pettiness.

I really liked Knox and figured out the reason behind his wanting to buy the house while Willa was a tad too into the whole family rivalry thing. To be honest, I didn't like her all that much for most of the book, but she did finally redeem herself close to the end of the story. I still felt as if the feelings were stronger and had been around longer on Knox's end than on Willa's, especially because she entertained another guy's affections. However, the fact that there were no declarations of love between Knox and Willa made the story feel more realistic and I did end up with a smile with my face by the end of the book.

This book did serve as a good introduction to the series because it included the other members of the Dunn and Loveless families. I'm not sure if Peach Dunn and Brady Loveless have already had their story told since they were already engaged to be married here, but it would be interesting to read how they got together. I'm also wondering if Connie Dunn and Jay Preston will have their own book out, so I'm going to keep my fingers crossed for both those stories to come to fruition one of these days. If you're looking for a love story with a feisty heroine and a laid-back but sweet hero, try Bet the House. Four stars! ♥