Review: The Beautiful One by Emily Greenwood (The Scandalous Sisters #1) 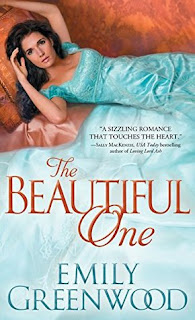 Anna Bristol has changed her name to Anna Black and tries to be one step ahead of the scandal that will befall her if her identity as the woman in the notorious set of drawings called The Beautiful One is exposed. Accompanying young Miss Elizabeth "Lizzy" Tarryton to the home of her guardian, Viscount Grandville, becomes an extended assignment when she meets the less than welcoming man himself. Only upon Anna's agreement to stay on for a month as Lizzy's governess does the viscount finally but begrudgingly capitulate to letting Lizzy stay at his estate, Stillwell, for the same period of time.

Will Halifax still mourns his wife Ginger, more than a year after her untimely and accidental passing, and has been a different man since. Having Lizzy, not just Ginger's niece but also Will's late best friend's daughter, in his home is something he is not prepared for and neither is he used to having someone with as spirited and opinionated as Miss Anna Black speak to him so boldly. Meeting Anna and being around her has awakened something within him and it appears that she feels the same for him. But Anna's secrets may put an end to their affair once the scandal that is The Beautiful One finally reaches Stillwell.

The Beautiful One is the first novel in The Scandalous Sisters series by Emily Greenwood and, heading into the ebook edition of this publication, I must admit that I was rather taken aback by the three hundred seventy-six pages that I saw staring back at me when I looked at my tablet. I was half-prepared for their to be parts that would be dragging and absolutely unnecessary, thinking those explained the length of the book. Surprising though, I was able to finish this book in one sitting and never felt bored or at all. As a matter of fact, I hadn't realized just how far I had gotten when I did take a peek at the page number at one point of my reading experience. It didn't disappoint and left me looking forward to the next book, which I hope will be about Lizzy Tarryton and Tommy Halifax, Will's ward and brother, respectively.

This was a good regency romance with an interesting story of a young woman trying to escape looming humiliation at the hands of two men bent on exposing her identity as The Beautiful One and whose images in various states of undress were unknowingly put on paper. Even with everything that was weighing on her, Anna Bristol/Anna Black was a character that showcased inner strength and fortitude and a genuine need to protect and stand up for those she felt were being mistreated. The character of Will Halifax, also known by his title of Viscount Granville, is one that I couldn't help but feel empathy for, especially after having lost his wife in a riding accident. I liked how Anna and Will's relationship evolved over an extended period of time. Theirs was a slow burn type of romance and, fortunately, it was worth the wait.

Regency and historical romances were among my top favorites growing up, though I have noticed that I haven't read as many of them recently. Books like The Beautiful One make me miss those old pocketbooks that I have lining some of my bookshelves and make me want to read even more of the sub-genres now. I enjoyed this book and loved its tale of the power of love and that accepting someone for their past and present will enable you to have a more promising future as a couple. This is my first Emily Greenwood novel but it certainly won't be the last. Aside from book two in the series, I'll be checking out her list of past work and will be adding on to my to-be-read (TBR) list and will hopefully have as good a reading experience as I did this time around. I'm going to be giving The Beautiful One four stars. ♥

Purchase The Beautiful One on Amazon | B&N | Kobo.