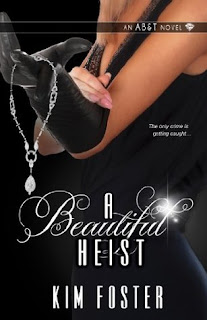 Cat Montgomery is a thief, and an exceptionally good one at that, but she also isn't your usual, run-of-the-mill burglar. She has a credo, because even some thieves need one, that she lives by: she never steals from those who would go hungry, she never steals anything that isn’t insured, and she doesn’t steal frivolously. When she's offered a job that the Agency of Burglary and Theft or AB&T have no knowledge of, she can't help but think that this may finally be the one task that will give her the feeling of redemption she's been looking for every since her younger sister Penny's death. Getting her hands on the legendary Fabergé egg that is supposed to house the gifts of the Magi is difficult enough but when two factions are after the same thing and her ex-boyfriend, FBI Agent Jack Barlow, and an AB&T art thief, Ethan Jones, get involved, all bets are off.

A Beautiful Heist is the first novel in the AB&T romantic suspense series by author Kim Foster, a trilogy of books that follows the escapades of talented thief Cat Montgomery.  This first one introduces readers to Cat, two love interest--FBI Agent Jack Barlow and AB&T colleague Ethan Jones--and the supporting cast of characters--Cat's parents, her handler Templeton, her best friends, etc. Cat keeps going from one job to another, hoping that the next one will be her last and waiting 'til she gets that feeling that she's received some sort of absolution for not being there when her sister Penny needed her. She's smart and sassy and while she's careful while she's on the job, she has a tendency to be reckless when it comes to her decision-making, especially when it involves her personal life.

After having finished the book, I found myself on Team Jack because of both the history and the chemistry between him and Cat. While it may seem that Cat would be better suited with someone like Ethan because he has a better understanding of the world Cat inhabits, Jack's back story makes it clear that he isn't as straight-laced as he may appear. There's also something about someone in law enforcement with a shady family background and someone who knowingly breaks the law but is somewhat of a female Robin Hood falling for one another that tickles my fancy and puts a smile on my face.

Although rather lengthy, this was a good book that has enough romance and suspense and a commendable dose of humor to elicit thrills and chills. Cat is strong female lead character and while I was able to choose between Jack and Ethan, I'm sure some readers were torn, especially since they're both enigmatic male leads. The ending presents a quandary of sorts but it'll be interesting what lies ahead for the characters. A Beautiful Heist gets four out of five stars. ♥