Review: At His Service by Suzanne Rock (Playboys of Boston #1) 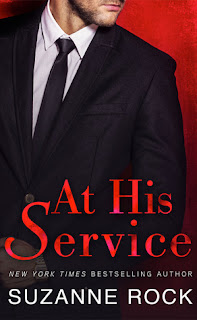 Karin Norell has a few more weeks left in her internship at the Palazzo, but with the other employees going AWOL when they're needed the most, she finds herself doing double-duty. When she finds herself trapped with nowhere to go when the head of Perconti Enterprises, under which the Palazzo belongs, suddenly shows up in his suite, he immediately assumes she's the stress reliever that his brother has sent. From there, things between them escalate quickly--Leo opens Karin's eyes to a world of pleasure and passion she's never encountered with any other man and Karin opens Leo's heart to the possibilities of being with someone who isn't after his wealth, his name, someone he can be himself with.

Karin is in over her head with Leo, even as her feelings for him grow, she knows that they're from very different worlds and there are those who appear to be working to make things even more difficult for their blossoming relationship. The staff of the Palazzo is already up in arms regarding the working conditions in the hotel and the less than stellar management of the establishment. Adding to the tension is the revelation of Karin's past with Jason Stone, owner of Stone Suites and a man Leo doesn't particularly like. When things come to a head and Leo's forced to do make Karin the sacrificial lamb, will what they have be able to survive it along with all the interference and intrigue and someone from Leo's past?

At His Service is the first novel in the Playboys of Boston series by Suzanne Rock and was originally released as a four-part serial, which I read a few months back. For this review, I decided to re-read the whole thing, just to make sure my feelings hadn't changed about it. While I still had the same moments of frustration with regards to certain choices that both Karin Norell and Leo Peconti made in the book, I could see that there really was a connection between the two of them, though I'm still wondering if it really was love or something more basic. Karin is smart, but the girl tends to let her heart rule over her head and that may not necessarily be a bad thing, but if it's what you tend to do all the time, you're bound to end up getting hurt. Leo has a lot on his plate, what with the family business in decline and his own deep, dark secrets, so I couldn't help but think that he saw Karin as more of a delectable distraction for him than an actual potential life partner for most of the story, but, of course, that's just from my viewpoint.

I would have honestly wished Karin were a stronger heroine, someone with a bit more backbone and had a more self-respect, especially after Leo's shabby treatment of her later in the story. Yes, even after reading the story a second time, I still find myself very pissed by what he did AND the fact that she was so accepting of it all by the time everything was said and done. For someone who is supposedly intelligent, she's made quite a lot of idiotic decisions in her young life. I will say, though, that I did enjoy the first half of the book, especially as they were discovering things about one another in the bedroom while still trying to keep their respective sets of secrets quiet. This wasn't a terrible story, just one that had lead character I couldn't really empathize with and it gets even more frustrating when it happens to be the female lead character. I am, however, curious about Leo's sister, Arianna, and what looks like more than a mere hookup with none other than Jason Stone. Book two, maybe? At His Service gets 3.5 stars. ♥

Purchase At His Service on Amazon | B&N | Kobo.