Review: All It Takes by Sadie Munroe 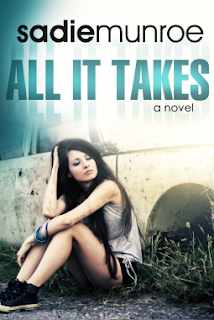 
Pinkie swear, I think, and duck my head for a moment, flashing back to our morning in bed, and how our hands almost seem to gravitate toward each other's, how our fingers link together in our own little promise, again and again.

Nineteen-year-old Star Collins is spending her summer in her late mother's house, trying to figure out how to dispose of the things that were hoarded within and outside its walls. It's been ten years since she was last in the town of Avenue, but with her mother now gone, she's left the monstrous task of wading through all the junk and clutter left behind. She knows she can't do it alone, so asking the guy no one wants to give a second chance to after spending five years in prison for vehicular manslaughter and getting paroled if he wants a job helping her clear out her mother's house is smart and practical...and the absolute right thing to do.

Twenty-eight-year-old Ash Winthrope may be out of a prison cell but it doesn't mean he's free. He has no choice but to stay in Avenue until his parole is over and his parents and almost everyone else in town have made it clear that he isn't being welcomed back with open arms. Everyone, that is, except for the beautiful raven-haired girl with tattoos. Not only does she offer him a paying job but she treats him like someone with worth. They know that when the summer ends, so will their time together, but neither of them will be the people they were when it started. Sometimes, all it takes for your life to change is to have the courage to take a chance.

Whenever I go into a book that isn't part of a series or is by an author whose work is completely new to me, i.e. I've never read any of their previous work or they're debuting their work, I have one very simple expectation: I expect to enjoy it. I mean, that's how it should be with any book you read, but then I add on other stuff if I'm a fan of the author's or am familiar with their stuff. With a new author, it's all about giving me enjoying myself. I don't need an overly complex story or to-die-for characters, though connecting with one or both of those elements is always a good thing. I'm even willing to overlook an editing error here and there (though the editor in me is always tempted to whip out my purple pencil to make corrections), as long as it's nothing egregious. As long as I finish the book with a smile on my face, all should be good.

So, when I started reading All It Takes, a new adult (NA) romance by first-time author Sadie Munroe, I went in with an open mind and heart...and was blown away. I had no concept of time while I had my tablet in front of me, falling in love with this story of a girl named Star left with no other choice but to literally pick up the pieces of the life her mother once lived and to confront the very things that her mother chose over her. Then she meets this guy named Ash who has spent the last five years of his life paying for the car accident that took the life of another driver and simply wants to see his beloved dog and start over but is informed by his mother that he isn't welcome in their home and that Bruiser ran off soon after he was sentenced. They're both looked upon as outsiders in the town of Avenue, she with her tattoos and blonde hair dyed black and he with his criminal record. But in each other they find a kindred spirit of sorts, someone who sees beyond the tats and prison time, and they both discover the importance of giving and taking chances.

This was such a story that was often heartwarming but also, at times, heartrending. It deals with not passing judgment on those whose lives we only know of based on gossip, personal prejudice, or a misplaced sense of justice. It tackles family issues and the realization that parents are human to and are susceptible to mistakes and lack of discernment and that, more often than not, family isn't necessarily the one you're born with but the one you create for yourself. It's about two people who work side-by-side, forge a friendship, and fall in love with the person who is more than his or her circumstances. With two wonderfully real and imperfectly perfect lead characters, an adorable four-legged scene-stealer, and supporting characters who bring humor and heart, All It Takes is a book I would more than happily encourage other bookaholics to read. It goes without saying that Sadie Munroe has more than impressed me with this debut of hers. She's an author I'm going to keep my eye on. This latest 2015 favorite gets five-plus stars. ♥♥♥

Pre-order All It Takes on Amazon.