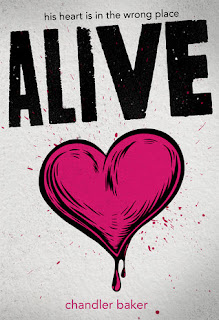 Note: This ARC was provided by the Disney Book Group via NetGalley in exchange for an honest review.

Two years ago, Stella Cross lost consciousness while at a swim meet and was later diagnosed as suffering from acute cardiomyopathy, a disease that requires her to undergo a heart transplant if she has any hope of living a longer life. Now, she feels her new heart beating underneath the scar that's on her chest and even with her very protective parents hovering around, she simply wants to return to school and enjoy her senior year with her best friends. But life isn't the same as it once was, and it isn't just the fact that she can no longer be part of the swim team. She experiences crippling pain at eight minutes past five in the afternoon every single day and she's having hallucinations that feel so real she's gripped by numbing fear.

Then Stella meets the new boy in school--Levi Zin. It's obvious that all the girls in her class want him, but he's got his heart set on Stella and it's soon obvious that Stella's got her heart set on him as well. They're drawn to one another in a way that no one else can explain and Stella begins to make certain changes that she knows Levi will appreciate. Her best friends, Brynn McDaniel and Henry Jones, remember the old Stella and this new Stella has them questioning if Levi's a good influence on her or not. Stella doesn't really care because as long as she has Levi, nothing and no one else matters. He's the only one who can ease her pain, the only one who knows the real her. Stella's heart belongs to Levi, come hell or high water.

Alive is one of those books that you go into thinking one thing and by the time the roller coaster reading ride is over, you're still trying to catch your breath from the twists and turns thrown your way. This may be Chandler Baker's first novel but she was able to do something that a lot of authors with more writing experience have failed to do--catch me off-guard and have my eyes widen and mouth drop open in shock more than once. There have been other stories, whether in books or television and film, about heart transplants and what happens to the recipients afterwards, but I liked the direction this particular book headed toward because it felt original and was a fictional feast filled with romance, mystery, and suspense.

This book had a strong cast of characters and I liked how readers are able to see some of them evolve and then devolve in the story. The teenagers act like teenagers, whether it's around one another or with their families, making it easier for those in the YA age group that the book is primarily targeted toward to relate to them and appreciate the struggles and experiences the teens in the story go through. I haven't been in that particular age group for quite some time now, but I can appreciate a good book with solid characters and a creative story. While there were moments that lead character Stella Cross did frustrate me with her decision-making, she shows us that even when your life gets off-track, you can always find your way back.

Aside from the love story and thriller aspects of the book, I fully appreciated the huge part family played, especially in Stella's life. They were there for her before, during, and after the diagnosis and surgery, never letting her forget that she had a support system she could lean on. She may have considered her little sister Elsie a "replacement child", what with her being conceived and born after they received her diagnosis, but Stella moving beyond that highlighted her beginning maturity as someone poised to undergo even more transitions in her young life. I loved how this book kept surprising me and is a 2015 favorite read. Alive by Chandler Baker is highly recommended and heartily (pun intended) gets five stars. ♥