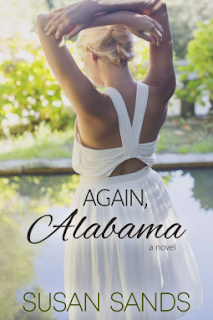 Note: This ARC was provided by Tule Publishing in exchange for an honest review.

Cammie Laroux left Ministry, Alabama ten years ago with a broken heart and an utter distrust of men. Now, she's left with little choice but to return in order to help her family with their event planning business while her mother undergoes surgery and recuperates. Her career as a television chef may have suffered a devastating blow but she's going to take the time to weigh her options. It doesn't hurt to have a fiancé who loves and trusts her, although they really need to settle on a date for the wedding soon.

It's just a few weeks in Alabama and then she'll fly back to New York, but those few weeks may end up feeling much longer when she finds out that the person her mother has hired to work on their house is none other than Grey Harrison, the very same man she once thought she'd spend the rest of her life with only to discover he slept with her best friend and got her pregnant. Now a widower with a young daughter, Grey says he wants to try and explain and make amends but Cammie isn't ready to forgive or forget.

Again, Alabama is a standalone contemporary romance from author Susan Sands and had an interesting premise to it, so naturally, when I got the invitation from Tule Publishing to read and review it, I didn't hesitate. The idea behind the story was a good one, but I felt it faltered a number of times, making it way too easy for lead characters Cammie Laroux and Grey Harrison to fall into each other's arms. It was overly convenient for Cammie to place blame on her fiancé for not staying in touch with her or that he sounded off during a conversation, virtually absolving her of the fact that she entertained thoughts of being with another man and acted upon them in more than one manner even before they officially ended things.

I'm not the kind of reader who has issues with cheating, but I sure as heck don't think sweeping it under the rug as if it weren't a big deal is something I agree with. The fact of the matter is, there was cheating, and you would think that someone who suffered the heartbreak that Cammie did would be far more hesitant to indulge in thoughts and actions connected with that act. Didn't she think it was ironic that Grey, the man who cheated on her with her supposed best friend, questioned her feelings for her fiancé or the strength of their relationship or was she that blinded by Grey still wanting her all these years to even care?

And then we've got all the other stuff going on: drama within the Laroux family, drama with Grey's young daughter Samantha, and drama with Cammie's career. You would think with all that drama going on, there would be a climactic resolution to at least one of them, but nope. Like I mentioned earlier, everything just seemed too easy-peasy when it came to that happily-ever-after part that countless romance readers crave. Even the issue with Samantha, which I was most interested in, ended too simply, but maybe it's thanks to the therapist who, based on the way Grey noticed her, made you think Grey he was going to ask her out. This was a case of a promising idea that fell short, story- and character-wise and while it was an okay read, I simply didn't connect with either of the lead characters. Alabama, Again gets three stars out five. ♥