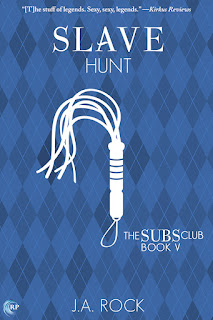 The game was usually like so: He fought. I growled. He gave up. I won.

But this time was different.

He was crying softly. I paused every couple of swats to kiss his neck again and tell him I loved him.

The words did not seem trite. Or unnecessary.


When one of my favorite series released its fourth book, I assumed it was the final one. I reveled in the magnificence of what were four of the most original and witty books about BDSM that I've ever read while mourning the end of a series that I adored. And then, out of the blue, I found out that there was a fifth book! So being the fangirl that I am, I jumped right on it, because, hello?! I love the Subs Club series and the four subbies that make up the core group--Dave, Miles, Kamen, and Gould. In this fifth--and I'm assuming this is the final one, but hey, the more the merrier, J.A. Rock!--book, we have ten different points of view. Yep. Ten. In the first four books, each story was told from the point of view of whichever sub the book was about. Here, we have Dave, Miles, Kamen, and Gould, plus their doms--D, Drix, Ryan, and Kel and Greg--and Maya, who should be familiar to fans of the series since she was part of the Subs Club and had that whole thing with the octopus guy. Yeah, you'll need to read the first four books, peeps...

Riddle has put together a slave hunt and you can't have a slave hunt with the Subs Club foursome ready and raring to be several steps ahead of the hunters who would love nothing more than to have them strapped to the whipping posts, and what happens there won't be limited to just whipping either. Dave wants to prove to D that he won't be all that easy to capture and has even gone as far as to be in an alliance with Kamen...who now has another alliance with his diminutive Dominant boyfriend Ryan. Then there's Miles, who isn't all that enthusiastic about the whole event, but his best friends seem excited and he doesn't want to rid them of their fun. He's been waffling about asking Drix to move in with him and their boy Zac, and while Drix hasn't said anything, he feels as if Miles will never ask him to move in. And while Kel and Greg won't be participating since they're the organizers, Kel has told Gould to win, but will he try to obey his Master, or will he try harder to be captured in order to be punished and humiliated by others?

THIS BOOK! GAH! Yup, it's so good that it deserves emphatic shouty caps adulation. I loved that we were able to get the viewpoints of the Doms. Seeing things from their perspective gives readers a better understanding of just how much they care for and love their subs. It's clear that Dave, Miles, Kamen, and Gould aren't all the same kind of submissive, but it's also obvious that they aren't merely subs to D, Drix, Ryan, and Kel and Greg, respectively. Their relationships are complex but there's also a simplicity to each one and the fact that the people involved understand what's going on between or among them is what matters most. Kamen has always been my favorite sub because the guy is silliness personified, but can I just say that Drix was such a great guy? He has such a depth to him that he's able to provide wise words and maybe gentle guidance to both the Doms and the subs. If Slave Hunt truly is the end for the Subs Club series, then it truly ended on a five-plus-starred, whip-cracking, subspace note. THANK YOU, J.A. ROCK! ♥