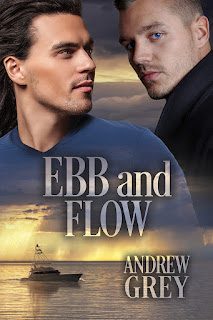 When I read Setting the Hook a couple of months ago, I had no clue that it was going to be the first in a series, but I'm certainly going to complain because I quite liked it and now we've got ourselves the follow-up in Ebb and Flow. Author Andrew Grey takes us back to Florida as his Love's Charter series brings back familiar faces and introducing a new character in a story about finding love and acceptance and how even after having found both, just like being on a boat, life isn't always smooth sailing, but when you find you're looking for, it'll be worth dropping your anchor.

The story itself centers on Harcourt Hanson III, who is none other than Skippy from book one, and Billy Ray is the new guy assisting Bubba (remember him?) on the second boat belonging to Mike Jansen and William Westmoreland (the couple from the first book). Skippy was quite memorable from book one and his group of friends are along for the ride once again, as is his assistant Alec, who has his own romance of sorts in the background, but hopefully, he and Steven will get their own story--a more complete one--shared later in the series.

Skippy is a successful partner in the law firm that his father is the managing partner at, but no matter how many cases he wins, it never seems to be enough for his father. When a new case requires him to head down to Florida, Skippy decides to make a working vacation out of it and invites his closest friends and assistant along, much to his father's irritation. Of course, a fishing trip is in order, one with Billy Ray as the captain's helper. The two men notice each other immediately, but while Skippy is out, Billy Ray is very much in the closet, taught that being gay is wrong.

While his family may now about his sexuality, Skippy has never felt as if he reached whatever standards his father has set for him as a lawyer. He knows all about rejection from those who should have loved and accepted him most, so he's able to empathize with Billy Ray, a young man who grew up with very fundamentalist beliefs ingrained in him by his preacher father that had him believing being anything but straight was a sin. Unfortunately, acceptance, whether it be of oneself or by those who matter most, is something not automatically given by many.

Andrew Grey has written yet another love story that has just enough angst to satisfy the fictional angst lover that I am and a good amount of lightheartedness to make sure that the story isn't bogged down by too much drama. Billy Ray has some naivete going on, but the guy's forced to grow up really quickly once he falls for Skippy. I seriously wanted to smack both Skippy's and Billy Ray's fathers' heads together. Ugh. Such homophobes, but they do serve their purpose in the story. Fingers crossed that we get more of Love's Charter. 4.5 stars for Ebb and Flow. ♥

Read my reviews for the Love's Charter series: