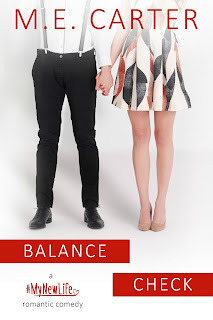 Balance Check is the sequel to Getting a Grip and is the second book in the #MyNewLife series from M.E. Carter. This picks up about nine months after the end of the first book, with single mother Elena Monroe now moving on after the guy she had fallen in love with moved away in order to live closer to his daughter. She's got a new job, one that she actually likes, and she's even got a guy who's made it clear that he's interested in taking her out on a date (though his being a twenty-five-year-old does give Elena pause). Things are moving forward, as they should, when who should make his presence known but one Greg Brady. Yep, the same Greg who still owns Elena's heart. The clincher? Greg's been back for longer than she thinks, and he's moved (back) because of his daughter Peyton (again). He had his reasons for not getting in touch with Elena once he knew he was going to be back, but you know what they say about well-laid plans. Now, she's angry and doesn't know if she wants anything to do with him, leaving Greg to try and figure out what he needs to do in order to show Elena that this go around, he's all in.

Once again, Elena has rewarded my patience by being the kind of heroine that I like rooting for. She's spunky and independent, and she doesn't need a man to validate her. That doesn't mean, of course, that she doesn't want to have a partner by her side. Cue in Greg, who has, indeed, returned, but he certainly flubs that up with not even bothering to give Elena a heads-up. I get why he wanted to stay mum, but dude, how long did you think you were going to keep it a secret considering which house you decided to buy AND the fact that you went back to the same job where you first met?! Gah! I really wish that Elena had made him squirm far longer than she did for that first date (post-return), but oh well, I get it. The heart wants what it wants, and her heart wanted Greg. Expect more drama from Greg's ex and even some from an unexpected source. From here, I honestly thought that we would see Callie get her own start to a new life, given her grumblings regarding her own marriage, but I guess I was wrong, which makes me think Balance Check concludes the #MyNewLife series, making it a four-star duet ending. ♥

Read my reviews for the #MyNewLife series: