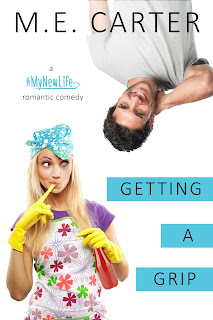 Getting a Grip is the first in author M.E. Carter's brand new romantic comedy series entitled #MyNewLife. This series starter introduces readers to forty-year-old single mother of three daughters Elena Monroe. Her husband of fifteen years decided she was no longer fitting the bill so he ditched her for the younger woman--his secretary--that he had been cheating with. The kicker was that he made Elena feel as if she were to blame for his misery and their subsequent divorce. Too many stretchmarks, boobs that were too saggy, and so on and so forth. She's got her best friend to remind Elena that her worth isn't based on what her ex thought of her and that's better off without him. While it's nice to know that she's got people around her who love her for who she is, it wouldn't hurt to have someone new in her life--a man who will appreciate who she is. Then she meets Greg Brady, himself a thirty-eight-year-old divorced father of one daughter. He gets her in a way that her ex never did and seems to really, really, REALLY like her AND her children. Maybe it's time to get a firm grip on her new life and claim her happily-ever-after.

M.E. Carter certainly doesn't disappoint, serving up a romantic comedy that more than tickled my fancy. Yes, it made me smile and laugh and I loved the romance between Elena and Greg, but I also appreciated the journey that Elena was on. She was trying to find her footing once again and wanting to make sure that it was much firmer than it had been before. She didn't simply want to be a better mother but a better woman as well, and not just for others but ultimately and most importantly, for herself. Obviously, I wasn't a fan of Elena's and Greg's exes, but they did provide a bit of that conflict that was necessary in order to keep things interesting and to test this new and burgeoning relationship that Elena and Greg were trying out for size. Speaking of conflict, can I just say that the cliffhanger of an ending was one that I seriously wasn't expecting and that I nearly threw my tablet down to the ground in absolute shock and frustration? Argh! I would've liked a warning, but I get why some authors like keeping readers on our toes. Suffice it to say, I'll be waiting anxiously for Balance Check. 4.5 stars for Getting a Grip. ♥

Purchase Getting a Grip on Amazon | B&N | iBooks | Kobo.