Book Spotlight: A Change of View by Freya Barker 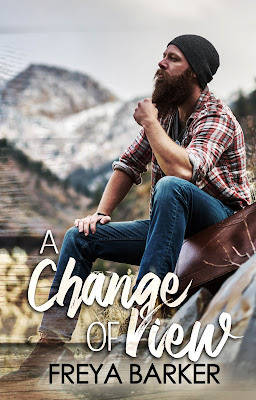 About A Change of View
What if one morning you look in the mirror and no longer recognize the person looking back?

When Leelo can no longer identify herself by the roles that once defined her, it's both terrifying and liberating. Oh, she feels the loss, the grief, and then the anger, but when she inherits property up north, she jumps at the promise of freedom and independence.

Yet not everyone in her new community is what they seem, starting with the surly mountain man down the road.

As owner of the local fishing lodge, Roar is content with his everyday life. And the older he gets, the less he appreciates change. So when a blue-haired, tattooed ‘city girl’ moves into the old motel, shaking up his daily routine, he’s none too pleased.

Still, something about the woman’s easy smile and almost reckless grit has him step up as her keeper. 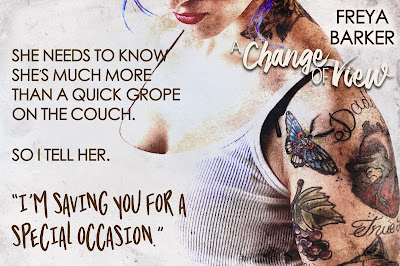 Read my five-plus-starred review of A Change of View.

Add A Change of View on Goodreads. 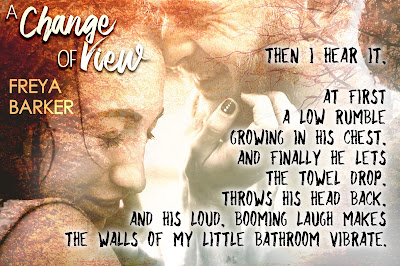 An Excerpt from A Change of View
I slap my thigh where a mosquito just bit me. I wipe at another one that lands on my arm, and pretty soon the buzzing is loud around my head, and I’m frantically waving my hand around my face. A blood-sucking army is out tonight, and I scramble to my feet, snatch up the now empty bottle, and hustle toward the sanctuary of my house.

My heart lodges in my throat when I see a figure detach itself from the shadows of the porch.

“Was wondering how long it would fucking take before you came running.”

I bend over, gasping to get air in my lungs, when I hear the voice.

“I swear, Riordan Doyle…one day you’ll be the death of me.”

“Not what I had in mind,” he chuckles easily, as he grabs my arm, drags me inside, and out of the way of the charging mosquitoes.

“What are you doing here?” I ask, as he takes the bottle from my hand, sets it on the counter, and pulls me into my living room. There he drops down on the threadbare couch and tugs me down beside him. “I thought you went home?”

“I did,” he confirms, throwing his arm over my shoulder and tugging me to his chest. “And I was just putting my feet up on the coffee table when I realized I didn’t want to be there.”

“No,” he repeats. “Couldn’t relax. Started thinking about this…thing…between us. And you know what? Waiting for the right time is for the fucking birds.”

“It absolutely fucking is,” he says with conviction, curving his free hand along my jaw and turning my face toward him.

His hazel eyes are almost black in the scarce light of my living room, his heavy-lidded gaze roaming my features before settling on my lips.

I can feel the deep rumble of his voice down to my toes, and my own drops a few octaves lower as well.

“You do?” I mutter breathlessly as his head bends down.

It’s clear from my distinctly unimaginative responses that my brain cells have signed off for the day. I’m starting to sound like a goddamn parrot, but Roar doesn’t give me time to linger on that thought. His mouth is already on mine and his tongue is demanding entry.

One moment I’m tucked beside him on the couch, and the next I’m on my back, Roar’s heavy frame covering me, his lips still firmly fused to mine. Good God the man can kiss.

Freya Barker inspires with her stories about “real” people, perhaps less than perfect, each struggling to find their own slice of happy. She is the author of the Cedar Tree series and the Portland, ME novels.

Freya was the recipient of the RomCon “Reader’s Choice” Award for best first book, Slim to None, and was a finalist for the 2016 Kindle Book Awards for From Dust. She currently has two complete series and three anthologies published, and is working on two new series; La Plata County FBI—ROCK POINT and Northern Lights. She continues to spin story after story with an endless supply of bruised and dented characters, vying for attention!