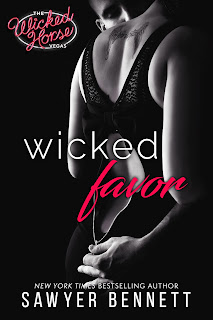 Sawyer Bennett's Wicked Horse Vegas series needs to come with a note about having a fan on standby because if you thought the original Wicked Horse books were hot, this spin-off is a scorcher. You know how they say what happens in Vegas stays there? Well, that may have been for the naughty stuff people do in Sin City, but if you intend to engage in wickedly kinky fare, then you best head on down to the Wicked Horse where what happens there stays with you even after you leave. I quite enjoyed the five novels that made up the author's original series, and based on the series starter for the Vegas ones, Wicked Favor, I do believe I'm going to be addicted yet again to Bennett's brand of fictional wickedness. This is one ride you may not want to get off of...though it may get you off, if you get what I mean. *wink, wink* This spin-off series can be read independently of the one that came before it.

The Wicked Horse is the place to be if you're looking to indulge in your dirtiest, most decadent of sexual fantasies. If you've got a kink that needs privacy and fulfillment in Vegas, look no further. So, when owner Jerico Jameson is approached by a woman with bruises and tells him that she's calling in the favor he owes her brother, he's caught off-guard, a nearly impossible enough feat, but it appears that Trista Barnes has accomplished it. If she wasn't so desperate, she wouldn't have had to do this, but Jerico is her last resort. Jerico is willing to give her the money she needs, but in exchange, she'll have to work off the debt for four weeks. What Trista doesn't know is that Jerico's got a plan, one that involves using her as he means of finally exacting revenge on the man who betrayed his trust--her brother. All's fair in love and war, but tell that to Trista who's falling for the man who may eviscerate her heart.

I loved how this book wasn't just about all the kinky sex. Yes, people, there's an actual story that's worth reading. Jerico has deeply rooted reasons for seeking vengeance against Jerico's brother. Did I agree with his motivations for doing what he was planning on doing with Trista? No, but I do understand why he thought this was the perfect opportunity for him to do so. After all, I'm one of those people who believes that if you really want to hurt someone, you don't go after them; rather, you go after those closest and mean most to them. While I did get what I was expecting in terms of how Jerico's feelings would change and that his plans for revenge would be revealed, the author managed to surprise in other aspects of the story. This really was a love story Wicked Horse-style and I've got my fingers crossed that the rest of the series plays out as well as Wicked Favor did. This receives five stars. ♥