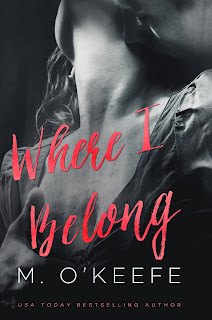 Tommy MacNeill and Beth Renshaw fell in love at sixteen and then were left with no other choice but to go their separate ways after the events of one particular night that shaped what happened to them and their friends for years after. When they meet again, Beth is hiding behind a public persona named Jada, and they're as different as night and day. Jada is who's able to toughen up and face anything the world throws her way. Tommy sees these two sides--one of the innocent girl he loved, the other of the intriguing but jaded woman he's falling for. But whichever version she may be, Tommy knows he's not meant to be with either one. Circumstances and fate have other plans, though, and now, danger is chasing after Tommy and he's dragged Beth along for the torturous ride. They hide in the one place Tommy never thought he'd ever return to...but it could be what saves them in the end.

Where I Belong is the conclusion to the second chance romance slash romantic suspense story of Tommy MacNeill and Beth Renshaw, which began in Lost Without You. M. O'Keefe left readers on tenterhooks with the cliffhanger ending in book one, and while we do get a resolution with as far as Tommy and Beth's story as a couple is concerned, there are still questions that linger. And that epilogue's end? Cliffhanger. EVIL cliffhanger. So, what does that mean? We didn't really think there was only one debt to be paid, right? Remember, it wasn't just Tommy and Beth who were present during that life-altering, nightmare of a night. So, yes, I'm expecting the series to continue, and I have a feeling we haven't seen the last of Tommy and Beth. For now, though, these two have gotten the happy-for-now ending they've fought for and Where I Belong hit all the right notes, which is why it gets five stars. ♥

Read my reviews for The Debt series:

Lost Without You (book one) - five stars - My Review

Where I Belong (book two) - five stars - My Review (posted above)

Purchase Where I Belong on Amazon | B&N | iBooks | Kobo.