Review: A Way with Words by Lane Hayes (Memories with the Breakfast Club Kindle Worlds) 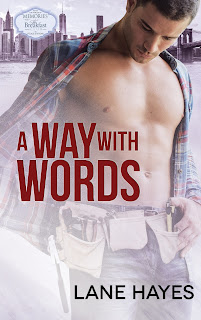 Short but sweet and oh-so-sexy--that's what A Way with Words was to me and Lane Hayes has shown once again why she's a favorite and a go-to author for many M/M romance readers. This novella is part of the Kindle Worlds inspired by two of author Felice Stevens's series, Memories and Breakfast Club, and is the first in Hayes's A Way With collection of stories. Set in Brooklyn, this was the highly satisfying story of Tony De Luca and Remy Nelson. Tony is twenty-nine and works for his uncle's construction firm. He comes from a close-knit family and there's no shortage when it comes to matchmaking. But how does Tony explain to his family that he has no interest in finding a girlfriend because he would much rather have a boyfriend? He's never felt pressured to confess his sexuality before...that is, until he meets twenty-seven-year-old musician slash bartender Remy who tempts Tony in ways no one else ever has in his almost thirty years. Everything about what they share means a lot to Tony, but keeping Remy will mean it's time for Tony to not only be honest with himself but to be honest with everyone in his family.

If this is just the beginning to Lane Hayes's new series, I can only hope and imagine how great the rest of it will be as the series progresses. This was such a fantastic start to the A Way With stories and a wholeheartedly wonderful addition to the Memories with the Breakfast Club Kindle Worlds. Not only did I feel like I got to know what made Tony and Remy click but both main characters develop in the less than one hundred pages in which their story unfolds. Tony's fear of rejection from the people whose acceptance mattered most felt real and it's something that a lot of people can relate to, regardless of whether it's about their sexuality or something else entirely. The romance part may seem like it developed quickly, but hey, there's no set time line when it comes to like, lust, or love, right? I believed the connection that existed between these two and I was totally into their love story. This may not have been a full-length novel, but it felt like one--it was complete, heartwarming, had an entirely entertaining story, and gave us two main characters to cheer for. I'm giving A Way with Words five out of five stars. ♥

Purchase A Way with Words on Amazon.