Review: Talk British to Me by Robin Bielman (Wherever You Go #1) 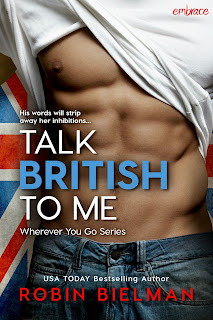 I haul her up against me and kiss the shit out of her. She melts against me, wraps her arms around my neck. We kiss until I know I’ve got her.

Because that’s what I do.

Leave them wanting more. Not my best moment this time. I’m a selfish ass.

But the joke is on me, because it hurts like hell leaving her.

Twenty-three-year-old Mateo Gallagher loves his job. He's none other than The Dating Guy, known for sharing his latest dating experiences, and through his insights, passes on whatever he's learned to his ever-growing listening audience. Who wouldn't want to be paid to go on dates? It's not like he's intending to get married and start a family anytime soon. He's already experienced heartbreak once before and so why shouldn't he enjoy everything singlehood has to offer? Think of it as work research. He knows what makes girls tick and what'll make them want more than a peck on the cheek at the end of the night. But it seems that Teague Watters is in a league of her own. Mateo can't quite get as good a read on her. Just when he thinks he's figured her out, she manages to surprise him. She also seems immune to his well reputed charms, but he doesn't see her as a challenge that he needs to conquer. If anything, Mateo finds himself wanting to actually spend time with her and get to know every single thing about the girl from Cascade, Oregon who decided to follow her dreams all the way to Los Angeles, California. But with his job requiring him to be single and always ready to mingle, will Mateo be able to stick to being friends?

Son of a biscuit, how I loved this book! I seriously ducking adored everything about Talk British to Me, the first in Robin Bielman's brand spanking new series from Entangled, Wherever You Go, which is a spin-off of sorts of her Secret Wishes series (which I have yet to read but is now on my to-be-read list). I lost of count of how many times I thought this series starter was going to go one way only to be surprised--and pleasantly so!--with the direction Bielman took the story. This is romantic comedy in fiction at its best, with a freshness and crispness that makes you want to take a bite of its delectable deliciousness again and again...and again. Mateo Gallagher and Teague Watters were breaths of fresh air who managed to be friendly, flirty, and funny, all in equal measure. Mateo is upfront with Teague from the beginning and they do, indeed, start off as friends--although it's pretty obvious from the get-go that there's a smidgen--Ha! It was more than a smidgen!--of an attraction there. But in hindsight, it actually was more than attraction; these two had an honest-to-goodness connection that was just begging to be explored, and explore Robin Bielman did! And guess who gets to go along for their fun-filled ride? We do! YES! Readers, rejoice!

Thank goodness Mateo wasn't a jerk. Yes, he knew he had certain qualities and attributes that made him more appealing to womankind, but he was never an ass about it. He was confident but not cocky--at least I didn't think so. He was always respectful of women in general and Teague in particular, but he did give her a nudge or two. He was a true blue good guy, whether it be to his family or his closest friends or his neighbor's six-year-old daughter Zoe. I liked how he was with Teague and vice-versa, and wasn't she a surprise of a heroine?! She may have come from a small town back in Oregon, but the girl gave as good as she got and she was full of sass. Just like Mateo, she clearly loved her family and was an all-around good girl who always had a ready but sincere smile for anyone, even her bitchy boss who just happened to be Mateo's mother. Mateo and Teague's story was everything I could have asked for in a weekend read and it easily joins the ranks of my favorite reads for 2017. Robin Bielman is the real deal and I can't wait to see where she takes the Wherever You Go series, and yes, I'll go wherever she takes us next because there are already several supporting characters who've intrigued me. Five-plus stars for Talk British to Me. ♥