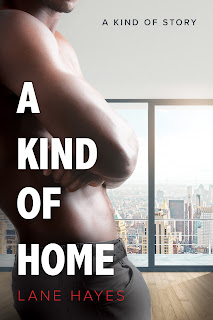 Note: This ARC was provided by Dreamspinner Press via IndiGo Marketing & Design in exchange for an honest review.

A Kind of Home is the fourth novel in author Lane Hayes's A Kind of collection of stories centering around the rock band Spiral, though the second book isn't directly connected to a band member but someone who worked as a stylist for the band and happened to be friends with the members. I'm not sure if this is the final book, but I'm thinking it might be since the three members of the band who are either bisexual or gay now have had their stories told. Book four is a friends to lovers romance between Spiral's thirty-two-year-old lead guitarist, Isaac Dalton, and a former construction worker turned aspiring pastry chef who happened to be Isaac's teenage best friend's older brother (by a year or so) named Adam McBride. Adam was Isaac's crush in high school but nothing could have ever come from it, not with Adam being straight, going on to marry his high school sweetheart. Isaac agrees to let Adam stay at his place for a week, but when Isaac returns from Spiral's world tour, Adam clearly has made himself at home. Will being unlikely roommates open the door to unexpected secrets...and possibly even mutual attraction?

Isaac's the guy who's labeled as bisexual by the record label's PR department but is actually gay while Adam's the guy who's been labeled by Isaac and everyone outside of his siblings and ex-wife as straight but has always been bi. The two share a potent kind of attraction, but even as their feelings for one another develop, Isaac doesn't think that Adam fits in the chaotic world that Isaac is in, especially not with a stalker who appears to be escalating their need to let Isaac know just how much he means to them. As individuals, I liked Isaac and Adam, but as a couple, I wasn't fully convinced that what they had was a truly intense and deep kind of love. Even their friendship felt awkward, almost as if their being forced together in one place had more to do with it than anything else. Maybe it's just me, and maybe it's because I read this series one book after the other, so I can't help but immediately compare each story. Among the four, A Kind of Home is the one that I least connected with. If I took all the elements separately, they worked, but in its entirety, the lack of chemistry failed to make everything click. 3.5 stars. ♥