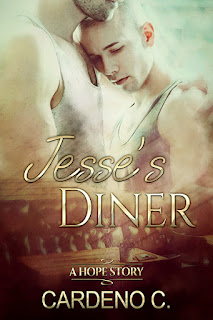 Note: This ebook was provided by the author via Social Butterfly PR in exchange for an honest review.

At twenty-two, Tanner Sellers considers himself fortunate to have the kind of life that he has. His best friend Mike may be three hours away in college in Las Vegas, but he knows he can count on him, just like he always has in the six years they've been friends. Mike's pops Jesse became Tanner's mentor, and after his heartbreaking passing nearly two years ago, Jesse left his diner in Tanner's capable hands. When Mike calls Tanner and asks him to check in on Mike's dad because he's worried about him, Tanner may be hesitant but he agrees to do so. So what if thirty-nine-year-old Steve Faus is the guy he's had a crush on since he was sixteen? This is the man who's still grieving the loss of his partner--the same man who is his best friend's father. There's no way Steve would be interested in Tanner, but when Steve surprises him by asking him out on a date, notions that they're only friends start crumbling. But could this be nothing more than a casual thing for either one of them or could this possibly be Steve's chance at finding love a second time around and Tanner's chance at falling in love with his longtime crush?

I liked the Hope series starter, McFarland's Farm, which featured the Jesse's Diner in the story and highlighted it as one of the landmark places in the small town, but I confess that this second book is my favorite between the two that are currently available. The age difference angle is carried over, but while the one in the first book was eight years, the gap between Tanner and Steve was seventeen years, not that I was the least bit bothered. I liked that Tanner had ties to Steve's family courtesy of his friendship with Mike and his mentorship with Jesse. The friendship that Tanner and Steve form between themselves quickly moves onto flirting, and I adored that innocent Tanner had no clue that that was what was going on. There's a bit more angst in this second book and I liked the twist that's revealed near the end, a twist that brought a sappy smile to my face. I swear, this town is aptly named because hope is exactly what the characters need and get in the two tales so far. I'm giving Jesse's Diner four stars. ♥