Review: Edge of Regret by Molly E. Lee (Love on the Edge #7) 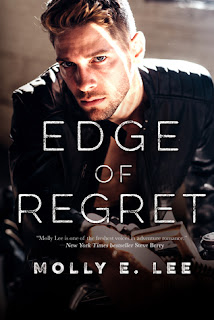 Edge of Regret is the seventh novel in the Love on the Edge series penned by Molly E. Lee and it carries over the same adrenaline rush that can be found in the six previous books, making for an exciting read. However, this was also a story that had a fair amount of angst courtesy of a hero dealing with the supposed betrayal of the two people closest to his heart as well as the rejection of his own parents and a heroine who carries a great deal of guilt mixed in with her post-traumatic stress disorder and a need for redemption since she doesn't believe she deserves absolution. It also happens to be a second chance romance with a military themed film set as a backdrop.

Wade Roberts had everything planned out after Mackenzie Patterson graduated from high school, but you know what they say about best laid plans. She chose to enlist in the Air Force--inspired by Wade's older brother Chance--in the process breaking Wade's heart when she ended things and told him she wasn't going to ask him to wait for her. Ten years later and three years since they last communicated, Wade is on a film set as a stunt double and is shocked to discover that one of the advisers is none other than his Mackenzie. Only she hasn't been his in years, not after what she and his brother did. This version may look like her but she's clearly broken. Can Wade fix his ex?

I mentioned earlier that this book has angst, but it isn't the kind that's overbearing. Life after they broke up wasn't necessarily easy for either one of them and the events right before and soon after Chance's death changed before their lives even more, creating a gap that neither one of them did much to bridge. But funny enough, I didn't feel frustrated with these two and their history of miscommunication, misunderstanding, and missteps. They were young when they broke up and A LOT of not-so-great things happened between that time and when they see each other again, but there wasn't any lingering animosity or blame game, which is one of the reasons I liked this book.

I've enjoyed Molly E. Lee's Love on the Edge series so far, and I can only imagine how difficult it must be to come up with something new each time, but this author manages to do it and she does it well. Wade and Mackenzie's story had that sense of adventure Lee brings to all her books, but it also had military romance and second chance romance feels--two very popular tropes that she's managed to put her own creative stamp on. And just like her characters, I couldn't get enough of this book in particular and this series in general. You can read Edge of Regret as a standalone, but you won't have any regrets reading the rest of the series as well. Five stars for this seventh book. ♥

Purchase Edge of Regret on Amazon.