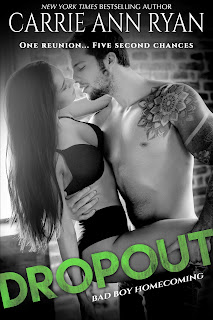 “I existed, Kate. I just was before I came back and saw you. Now, I want more. I don’t want to just be, I want to grow, I want to find out who I am when I’m with you. I want to feel more than just the day-to-day of breathing and living. I want to love you, Kate. I want that chance.” He paused, his heart racing. “Now, tell me. What could you feel for me?”

In less than a hundred pages, Carrie Ann Ryan managed to not just give readers a well-written and fully threshed love story more than ten years in the making with Dropout, the first novella in the multi-authored, five-book Bad Boy Homecoming series. I've yet to read the author's Montgomery Ink series, but a bit of poking around on Goodreads after I had a feeling that one of the peripheral characters may have been part of one the author's past books, and voila, I was right. However, you need not have read any of Ryan's previous releases in order to fully enjoy and fall in love with this latest published work of hers. Dropout was a sweet, sexy, and oh-so-swoony story!

Grayson Cleary knows that many back in Catfish Creek, Texas assumed he was a dropout because he didn't march alongside his classmates during their high school graduation. He doesn't really care what they though and probably still think about him. He was always the outsider anyway, but he couldn't refuse his best friend's request--insistence--that he show up for their tenth-year reunion, even if it meant driving for hours from Denver, Colorado. Of all the people in his class he expected to see first, it wasn't the girl he crushed on from the time they were sixteen until they were seniors. But then class valedictorian Kate Williamson was someone who always caught his attention, even though he very much doubted that he made any sort of memorable mark on the beautiful woman.

From the moment she became Kate St. Dalton, Kate's life changed forever. She was the girl who had such potential and a great deal was expected of her, whether it be from her family or everyone at school. But then she married early, got pregnant, and then lost her scholarship when she had to drop out upon the demand of her husband. Now divorced, Kate is back in Catfish Creek, and the single mother to a son and daughter who was number one in her class is now working as the administrative assistant to the guy who was number two. She's trying to get her life back in order and to be able to follow her dreams once again. And then the hot bad boy from high school returns for their reunion, and in the short amount of time they're together, will Kate's dreams for herself change yet again?

Gah! This story and these main characters were so frickin' adorable! They also happened to be hot as hell. I loved that the romance between Grayson and Kate felt so easy and natural. It was never rushed nor was it forced. I totally believed these two had that delicious and undeniable kind of connection that wasn't limited to just sex. As the first book in this collection, I think Carrie Ann Ryan did an excellent job introducing readers to not just her own main characters but potential other main characters in the four other books. We also get an idea of the kind of hierarchy that existed back in high school ten years prior, and can I just say that I'm glad Kate's ex got what he deserved, though I do wish his fiancée had been put even more into her place because she was just bitchy. I loved this novella so much that I honestly can't find anything about it to complain about. Dropout receives five-plus stars. ♥