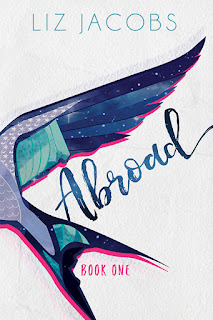 Note: This ARC was provided by Brain Mill Press in exchange for an honest review.

This is, without a doubt, one of the more memorable debut releases I've had the pleasure of reading and reviewing in the past couple of years. Liz Jacobs's Abroad, which is the first in a duology by the same name, is a new adult read, and it's a story about not just discovering things about yourself but accepting them. It's about the things that make us different but more so focusing on those that make us the same. In a world where reading book after book can sometimes feel monotonous because they start to all read the same, this debut novel is an absolute standout.

Jacobs has given a voice to twenty-year-old Nikolay Melnikov, a Russian-born American citizen who lands in London as an international student for a nine-month stint. That voice starts out tentatively as Nick tries to find his place in the world, but it gathers strength as the story continues. He finds friends and himself in the process, but there's one particular friend that he notices most of all--Dexter Cartwell, a British university student who's brimming with self-confidence but he's also someone who has his own personal and family issues that Dex quietly struggles with.

You know how there are times in our lives where there's that one thing we know about ourselves but don't want to admit it to anyone else? That's what Nick goes through for a good portion of the book, and being around Dex will either push him to be honest with himself and others or pull him deeper into that closet he's locked himself in for too long. It isn't just his sexuality that Nick has to get a handle on, and the journey's currently on doesn't come with a road map so he takes wrong turns and longer routes, but I found myself following him to see where he'd go.

Maybe it's just me, but the author's writing didn't come off as her telling me a story. No, it was more off me witnessing Nick and Dex's story. It wasn't "just" about finding love but it was this thought-provoking tale of finding yourself. There was also more to the book than Nick and Dex, what with a wealth of interesting supporting characters. You don't have to be queer in order to empathize with either Nick or Dex. We've all struggled with our identity at one point or another in our lives, which is why Abroad speaks to many of us and is five-star literary gem. ♥