Book Spotlight: The Fangs of Scavo by Selina Kray 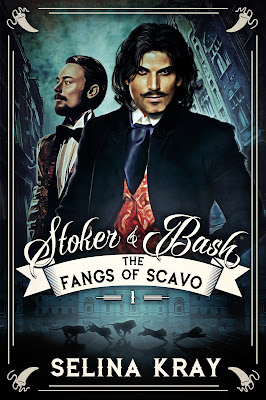 About The Fangs of Scavo
At Scotland Yard, DI Timothy Stoker is no better than a ghost. A master of arcane documents and niggling details who, unlike his celebrity-chasing colleagues, prefers hard work to headlines. But an invisible man is needed to unmask the city’s newest amateur detective, Hieronymus Bash. A bon vivant long on flash and style but short on personal history, Bash just may be a Cheapside rogue in Savile Row finery.

When the four fangs of the Demon Cats of Scavo—trophies that protect the hunters who killed the two vicious beasts—disappear one by one, Stoker's forced to team with the very man he was sent to investigate to maintain his cover. He finds himself thrust into a world of wailing mediums, spiritualist societies, man-eating lions, and a consulting detective with more ambition than sense. Will this case be the end of his career, or the start of an unexpected liaison? Or will the mysterious forces at play be the death of them both?

And just who is Hieronymus Bash?

Read my five-starred review of The Fangs of Scavo.

Add The Fangs of Scavo on Goodreads.

About Selina Kray
Selina Kray is the nom de plume of an author and English editor. Professionally she has covered all the artsy-fartsy bases, having worked in a bookstore, at a cinema, in children’s television, and in television distribution, up to her latest incarnation as a subtitle editor and grammar nerd (though she may have always been a grammar nerd). A self-proclaimed geek and pop culture junkie who sometimes manages to pry herself away from the review sites and gossip blogs to write fiction of her own, she is a voracious consumer of art with both a capital and lowercase A.

Selina’s aim is to write genre-spanning romances with intricate plots, complex characters, and lots of heart. Whether she has achieved this goal is for you, gentle readers, to decide. At present she is hard at work on future novels at home in Montreal, Quebec, with her wee corgi serving as both foot warmer and in-house critic.

If you’re interested in receiving Selina’s newsletter and being the first to know when new books are released, plus getting sneak peeks at upcoming novels, please sign up at her website.