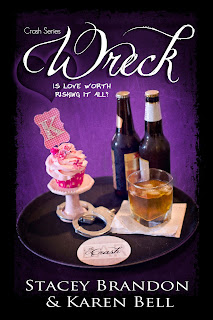 Wreck is the third and final book in the Crash series from the writing duo of Stacey Brandon and Karen Bell, and it's all about the lone male in the original trio of friends in Crash, the bar they all worked at, and the boss's daughter--bartender and assistant manager Kyle Taylor and Kinleigh Walters, college graduate and seven years Kyle's junior. The previous summer saw Kyle notice Kinleigh and there was a whole lot of flirting and something promising that seemed to be in the works. But Kyle doesn't believe himself worthy of someone like Kinleigh, and the fact that she's the daughter of not only his boss but the man who was almost like father figure to him placed her in the hands-off section of his libido. And then she returns, only this time, she has no intention of leaving any time soon, choosing to live above the bar and get some working experience in the process. Kinleigh also intends to prove to Kyle that they belong together, but Kyle is dead-set on proving otherwise. Will these two be able to come to terms with their feelings for each other and fight to be together, or will it all come to an end with the threats of a stalker?

The Crash series has been an enjoyable one, with all three books giving lighthearted stories with just a hint of angst. Kyle finally falling for a girl felt like a long time coming, but the guy deserved his own happy ending, especially after having been the best kind of friend to both Charli Mitchell nee Harrington and Liv Garrett as well as the respective men in their lives, Logan Mitchell and Zac Reynolds. This had that familiar reformed manwhore who changes his ways when he meets "the one" story line, but with an added element of suspense, courtesy of a spurned suitor who doesn't take rejection well. It was nice seeing Charli and Logan and Liv and Zac here, giving just enough support without taking the spotlight away from Kyle and Kinleigh. The side story line involving Kinleigh's divorced parents was actually kinda cute, and I appreciated how her dad was protective of her yet also let go enough for her to pursue her happiness. This third book ended on what I think was the best note because it was a rather good surprise and was a great reflection of how fun the series has been as a whole. Wreck receives 4.5 stars. ♥

Read my reviews for the Crash series: