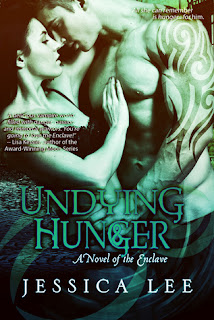 Her feelings for him ran too deep. She’d been so furious with Markus because, despite the pain he’d caused her, she couldn’t make herself stop loving him.

When Markus Santini betrayed the Enclave, he never thought he'd be within the walls of the group's home and still be breathing. Saving Alexandria Stevens from Marguerite Devonshire, the very same vampire who made Markus turn his back on the vampires he served, may be what's earned him a respite from having a silver dagger embedded in his heart or getting his head chopped off. The level of distrust is high and the only one willing to even consider giving him another chance is master vampire and Enclave leader Kenric St. James. But the only one Markus seeks redemption from is the woman he turned into a vampire against her will and whose memories he stole, memories that will make her despise him even more.

There are still gaps in Alex's memory of her time with Markus in Marguerite's lair and she's grown increasingly frustrated. A year ago, Markus took away more than just her life, and she wants answers, answers that he refuses to give. As much as Alex wants to stay away from the vampire she hates, she's drawn to him in ways that both confuse and excite her. When a vampire that both she and Markus know from their days in Marguerite's lair makes his presence known, Markus immediately sees him as a threat to the Enclave and, more specifically, to Alex. He may have turned into a soulless, heartless bastard of a vampire, but Markus is more than determined to protect the woman who changed him with his life.

Le sigh. If this is the final book in The Enclave series that I so love, then it most certainly ended the series on the highest high possible. With Jessica Lee's Undying Hunger everything came full circle. We saw how Markus Santini was manipulated in Undying Destiny and how his transformation was completed in Undying Embrace. In Undying Desire, he appeared to simply be waiting the Enclave out, ready to either be killed by his former fellow warriors or to simply waste away and die. And here, in this fourth book, we see Markus truly become the vampire he was meant to be. He didn't revert back to the warrior following orders he once was or the sadistic commander who was under the thumb of an ancient vampire thirsting for power. Was he a killer? Yes, he was, both as a human and a vampire, but there was so much more to him than that and finally learning his story gives us a better understanding of his motivations. Of all the Enclave warriors, he was the one I was always most curious of and boy, was my curiosity satisfied!

Alex Stevens was the perfect love interest for Markus, someone who was irrevocably tied to him in both horrific and touching ways. The hate-love thing going on was something that I quite enjoyed because there was this push-pull of emotions but nothing that became irritating to read. This vampire took her human life from her, and while she was, indeed, under his control while at Marguerite's, she was her own person when they began interacting again after a year of separation, a conscious choice on Alex's part. She had strength of character but was still vulnerable, unsure of her place in the home she shared with the other vampires or her own feelings toward Markus. She was on a journey of self-discovery as a vampire and refused to be a mere survivor of the atrocities she experienced when she was abducted and then turned. She's very different from her older sister Gabrielle, although they were both initially seen as somewhat constantly needing protection or watching over by everyone else yet proving to be quite formidable.

I more than appreciated that the story went down a path that was unexpected yet still wholly entertaining and thrilling. None of the books are, by any means, short in length but you become so absorbed by everything that's happening that you don't notice the time that has passed. Like I mentioned in my earlier reviews for the series, I became addicted and my craving for The Enclave was something I've rarely experienced with other series. There are a select few that I find myself so invested that every single installment and each lead character make the mark and I'm happy to say that The Enclave is one of those series. This does really feel like the final book in the series and while I'm feeling bittersweet about saying goodbye to the vampires who have etched their way into my heart, I'm also feeling very contented about how things have ended. Of course, I'd never say no if there were still a book or two (or more) in the wings, but if this is truly goodbye, then what a perfect way to go. Undying Hunger gets five-plus stars and The Enclave series, now an all-time favorite, has my undying love and an overall rating of five-plus stars. ♥