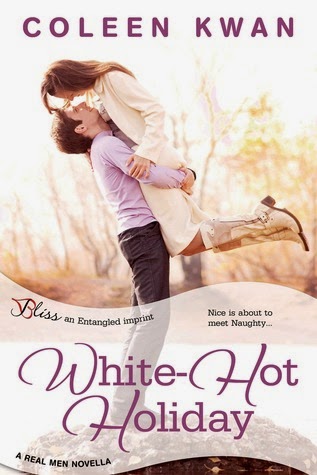 White-Hot Holiday is a Christmas novella in the Real Men series by Coleen Kwan. This quick read introduces us to two people in the life of Luke Maguire, male lead character of book two--one of his closest friends and one of his nieces. Even as Luke warns both of them to not pursue anything more than friendship, fate has other plans when a family emergency forces Luke and his family to leave the house for a few days and brings the two people who seem like such opposites closer than they ever thought possible.

Aaron Cade doesn't do Christmas. He's not into decorating every single inch of an area, he can't stand the songs that are played over and over again, and he doesn't understand how there are people who are just so gung-ho about the holiday season. So, when he decides to visit his friend Luke Maguire in Australia, the heat is certainly different from what he's used to but then he meets Luke's niece and sees that she appreciates Christmas and all its traditions and trimmings. Oh, he notices that she's quite beautiful too.

Naomi Spencer is looking forward to Christmas. It gives her something other than her failed relationship. She uprooted her life in order to try and build a new one with her boyfriend in London but he was too busy flaunting his wealth to even see that their relationship was doomed. Now, she's spending time with her uncle's family and even plays hostess to her uncle's friend from the U.S. Unfortunately, he could give Scrooge and the Grinch a run for their money, what with his cynicism regarding the Christmas holidays.

Though Aaron and Naomi notice each other right away, both are approached by Luke, asking them to keep their distance and not engage in anything that may result in a broken heart for Naomi. But when Luke and his family have to leave to tend to his mother-in-law, Aaron and Naomi spend more time together and Naomi starts to see that there's more to Aaron than his money and success and Aaron realizes that Naomi knows more about him now than any of the women he's been involved with before.

Naomi and Aaron's romance is like a start-and-stop love story, which lends to it a sense of realism because these two were very much aware that Aaron was only going to be in Buronga a few days and then return to his life in America. This wasn't even a case of insta-love but more of two people experiencing mutual attraction and feelings for each other spending every day in a short amount of time together resulting in a more compact but still intense road to realizing that they may, indeed, find happiness with one another.

This was a short but still substantial read. Naomi and Aaron were interesting characters and the fact that Naomi has an aversion towards wealthy guys made her thing with Aaron more intriguing. So far, this series has been consistently enjoyable and you know you're addicted when you enjoy having the old characters still be part of the story line. I'm on to the upcoming third book in the series and I've got my fingers crossed that it'll put a smile on my face just like White-Hot Holiday has. Four stars for this one! ♥

Grab a copy of White-Hot Holiday on Amazon | B&N | Kobo.

Note: This story can also be found in the Stranded with a Hero anthology, which you can get on Amazon | B&N | Kobo.