Review: "Vampire Trouble" by Sara Humphreys (Dead in the City #2) 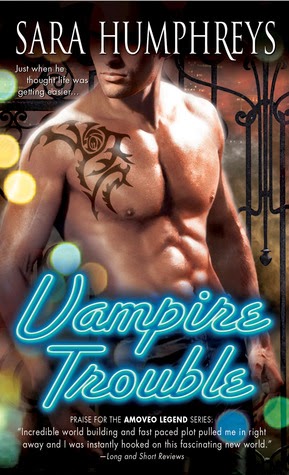 Maya Robertson is what is known as a youngling, having only been turned by her maker Olivia Hollingsworth several years ago. She has a tendency of speaking and acting without much thought and she feels as if all the rules of being a vampire are getting to her. On the other hand, Shane Quesada has been a vampire for over four centuries and has seen and experienced a great deal as a sentry of the Presidium, the vampire government. He's always put his duty first, never expecting to feel the pull when he first encounters the headstrong and wayward youngling and now she's captured his attention.

Maya takes the opportunity to work somewhere outside of The Coven, the club owned by Olivia, in order to get some breathing space. Shane volunteers and is later tasked by Olivia to keep an eye out for Maya. To show Shane that she doesn't need his protection or approval, she goes off with a werewolf prince only to discover that she's bitten off more than she can chew. When the werewolf prince and his pack threaten to start a war with the coven, Maya and Shane are forced to go into hiding in the home of Olivia's gypsy friend in Louisiana. There, things begin to develop between the old man and the baby vamp.

Maya's past has always been shrouded in darkness, with her fellow vampires unavailable to glimpse much from her blood memories other than what happened to her right before she was turned. But with Shane by her side, they will try to rediscover the life she led before she became a vampire and figure out how to deal with their being bloodmates. When the truth behind Maya's past comes to light, the ramifications become all too clear, putting Maya at even greater risk as is the precarious treaty between the werewolves and the vampires. Will Shane be able to protect Maya or will his lack of focus bring her harm?

Two for two, bookaholics! With each book I read in the Dead in the City series by Sara Humphreys, the more I fall in love with the characters and the stories. Vampire Trouble turns the spotlight on Maya Robertson and Shane Quesada, two characters introduced in the first book but both of whom were quite memorable. They seemed like such opposites, not only because Shane's been a vampire for four hundred years and Maya just a handful, but because their personalities appeared to be different. I liked that they had to work at their relationship and not simply accept the inevitability of their being bloodmates.

With a great combination of paranormal romance and action thriller, both the story and characters were well-developed and kept me engaged from start to finish. I love the world that Sara Humphreys has created and now that werewolves have entered the picture, it looks like things are going to be even more interesting! Reading Maya's transformation from rebellious young vampire to brave bloodmate was a joy and I highly recommend the two currently available books. Vampire Trouble gets five stars! ♥

Grab a copy of Vampire Trouble on Amazon | B&N | Kobo.