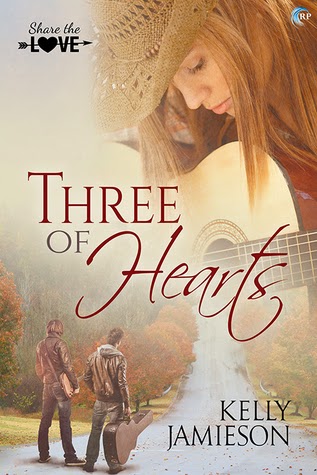 Each of the three books fits into its own genre, with the two others, Lucky Strike by Jane Devitt and Three the Hard Way by Sydney Croft, belonging to science fiction and paranormal, respectively, while Three of Hearts is new adult. The one thread that binds all three books together is that they all involve ménage relationships, though the book I'm reviewing is the only one that has two guys and a girl.

Haylee Tremayne is living her dream--she's on tour with her band that's composed of her two best friends, Ben Radcliff and Lucas Doan, and she has a boyfriend waiting for her back home. Then she goes online and sees that her boyfriend isn't exactly pining away for her and is on the arm of another girl instead. Though humiliated and angry, Haylee is thankful that she has Ben and Lucas by her side, giving her the love and support that she needs.

After their first night together, doubts begin to nag at Haylee and she's worried that the dynamic of their group has changed. She doesn't want to risk losing Ben's and Lucas' friendship and she also can't help but notice that there's more tension between these two men she considers her closest friends and the very same men she's now falling for. But can a relationship among three people really work and can you truly love more than one person?

This was a great story about friends becoming lovers but the unconventionality of their new relationship is realistically presented because there are moments that Haylee questions if being involved in that manner with Ben and Lucas will affect them both personally and professionally. The fact that there's sexual tension between Ben and Lucas themselves makes everything more complicated and I did end up wondering if Haylee would be the odd person out.

While Haylee's back story is delved into and Ben's and Lucas' aren't as much, it doesn't really affect the overall story because, in the end, it really was Haylee's to tell because this was mainly her journey to realizing the kind of woman she was and overcoming her own insecurities and hurts. I know that this kind of book isn't everyone's cup of tea but it was about more than just about having sex with multiple partners. With likable characters and a well-written story, Three of Hearts certainly deserves 4.5 stars. ♥

Grab a copy of Three of Hearts and the other books in the series on Riptide Publishing.