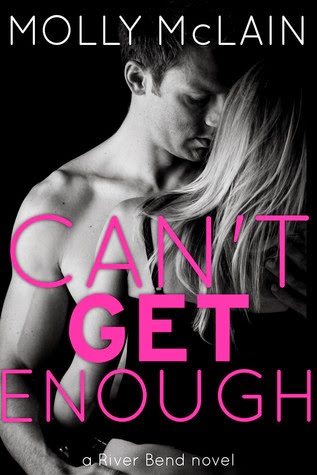 Can't Get Enough is the second book and third release in the River Bend series by Molly McLain. Readers were introduced to Tony Dunn in the first book, Can't Shake You, as Josh Hudson's right-hand man in his construction business and a friend to both Josh and his now-fianceé Carissa Brandt. We also learned about Tony's legal battle to gain sole custody of the infant daughter he never knew about. From that time on, he became one of those supporting characters that simply deserved to have his story told in his own book. And voila! Here it is in this sequel. ^.^

Tony Dunn has gone from ladies' man to focusing all his attention on just one female--his daughter Brianna. When his regular babysitter is unable to care for Brianna due to health issues, he takes Carissa up on her offer to hang flyers around town advertising his need for a new one. When a woman named Nicole contacts him saying she's interested, he's extra cautious, especially since he has no idea who she is, something that points out that she's a stranger in their small town. But when he finally meets her, he discovers that he may need her for himself almost as much as his daughter does.

Nicole Keller Hodges returns to the town of River Bend to take care of her late grandmother's estate. She hasn't returned since her last summer visit and though she likes the area, she can only stay a few months before heading to Chicago to take a new job in a hospital. She's starting over, putting herself first, and making her own decisions. She endured enough while  still married to her overbearing and controlling ex-husband. When she offers to babysit Brianna as a means to have some much needed cash, she realizes that Tony has to start paying attention to his own needs and not just to Brianna's.

Tony and Nicole hold off as long as they can from acting on their desires, even as their friends remind them that there's nothing wrong with doing so. Both of them know that their time together is limited and even if Tony wants Nicole to stay longer, he recognizes her need for independence and to follow her dreams. Nicole has waited years to finally pursue her plans but what if what will truly bring her fulfillment and happiness is in a small town and in the form of a ready-made family that loves and needs her as much as she loves and needs them?

Goodness, this book had me hooked me from the beginning and by the time I finished reading it, I was sighing in contentment. I loved the direction the story took because it was unexpected and yet seemed fitting for the lead characters. There were a few editing issues that I hope were addressed prior to the book's release but nothing overly distracting. River Bend is fast becoming one of my favorite series and Can't Get Enough is an apt title because I seriously can't get enough of the characters in this small town. I'm giving this third release 4.5 stars out of five and happily recommend it. ♥

Grab a copy of Can't Get Enough and Ms. McLain's other books on Amazon | Barnes & Noble.