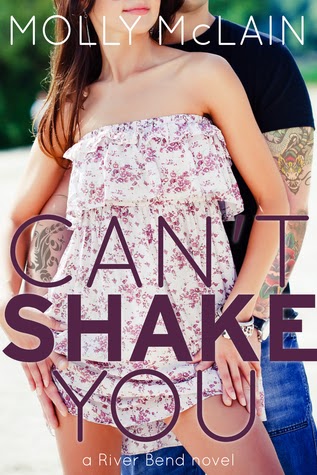 Can't Shake You is the first book in the River Bend series by Molly McLain and is about two people who spent one memorable night together only to be separated after his deployment. Upon his return, he discovers that the girl he couldn't forget is now dating his oldest friend. Fast forward three years later and while they're still very much attracted to each other, they've successfully avoided each other, pretending as if that night never happened. It's a secret that they've kept from their family and friends until he decides to step in when she needs his help the most and people begin to notice the sparks between them.

Carissa Brandt isn't the type of girl to do things on a whim except for that one night three years ago. She hasn't felt the same intense passion she did then but she knows that the guy she was with is off-limits. While on break from work as a teacher, she's concentrating all her attention on a house she's invested on and hopes to flip soon after re-construction. Unfortunately, the contractor she's hired appears to be cheating her out of her money but when ends up firing him, she has no choice but to take the oh-so-hot ex-Marine she's never forgotten up on his offer to take over as her contractor.

Josh Hudson has two rules he's never broken: 1. Don't get involved with someone you do business with, and 2. Don't get involved with a friend's ex. Both those rules are put to the test when he helps out the one girl he's never quite gotten out of his system. No matter how much he wants to pick up where they left off three years ago, Josh can't put his friendship with his oldest friend at risk to be with Carissa. However, the more time they spend together on the flip, the more he realizes that his being with Carissa again is almost a foregone conclusion that's been three years in the making.

When Carissa and Josh decide to sleep together one more time, they're simply hoping to finally get that three-year itch out of their systems. But what starts out as a second one-off thing quickly becomes something more but neither of them share the status of their relationship with anyone else. The thing is, some have already noticed and while most of them advise Josh to come clean with his oldest friend and Carissa's ex, there's one person in River Bend in particular who has it out for the contractor and may decide to hit him where it will hurt him the most.

I decided to read Can't Shake You and the novella that follows it as precursors to reading and reviewing the NetGalley-approved second novel and third release in the series. I went into this without any expectations and I must say--I LOVED THIS BOOK! It had humor, drama, romance, a bit of mystery and thrills, and enough steam to fog up my glasses (had I worn them at the time). Carissa and Josh were wonderful characters that you could easily fall in love with and the rest will have you wanting to find out more about them. I finished this in one sitting and am easily giving it 4.5 stars. ♥

Grab a copy of Can't Shake You and Ms. McLain's other books on Amazon | Barnes & Noble.