Review: "All I Want for Christmas" by Jennifer Gracen 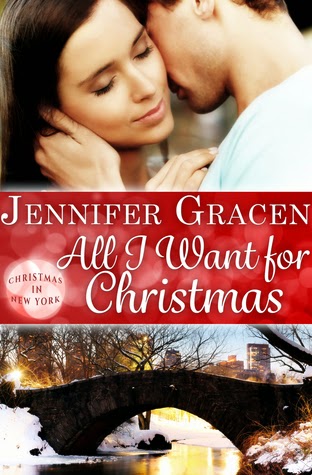 All I Want for Christmas by Jennifer Gracen is the second book in the multi-authored Christmas in New York series. The series tells the tale of a group of girlfriends and the men they fall in love with. I read all four books in one day. Once I started with book one, I just couldn't help myself and had to find out what was in store for the other friends. ^.^ While each book can be read as a standalone, I do recommend that they be read in order because the stories are loosely connected.

Cassandra "Cass" Baines is living a life many women her age would envy. She has a job that she enjoys and lives in a city she loves. She's surrounded by her closest girlfriends, each one more of a sister than anything else. The one thing that's missing is someone she could consider a soul mate. She thought she had that years ago but he abruptly ended their relationship, one she thought would end in marriage, and she's never been the same since.

Sean McKinnon hasn't had the easiest life but he decided to leave Ireland to join his best friend in New York in order to start over. He met a beautiful young woman and they fell madly in love with each other. He was ready to give her the world but when he was confronted with just how different they were, he felt the right thing to do was to let her go so that she didn't have him holding her back. He left for Los Angeles but his heart stayed in New York.

Years later, Cass enters a bar and comes face to face with the one man she's ever fallen for and the same man who broke her heart. On the other hand, Sean can't quite believe that Cass, of all the bars in the city, is standing in the one he co-owns. Cass is still holding on to a great deal of anger, especially since she never fully understood Sean's reasons for ending their relationship. Sean wants another chance to win her heart and knows he's got his work cut out for him.

Just like with the first installment, this second book is a second chance romance between two people who are different but loved each other immensely. When Sean let Cass go, he truly believed he was doing what was best for her but the Cass he sees years later is wary and stiff in spite of her professional success. What he did may have been good for her professionally but it scarred her personally. But then, learning about his childhood makes it easier to understand why he did it.

All I Want for Christmas gave me the opportunity to get to know Cass better after she was introduced in This Christmas and showed that there was something behind the no-nonsense persona she initially gave off. Sean was a great character and the guy had me swooning at the end. ^.^ This was a fast but quite enjoyable holiday read and did well in continuing the high standard set with the first book. All I Want for Christmas gets four stars. ♥

Grab a copy of All I Want for Christmas and Ms. Gracen's other books on Amazon.