Review: "The Blank Canvas" by Amanda Black (The Apartment Novels #2) 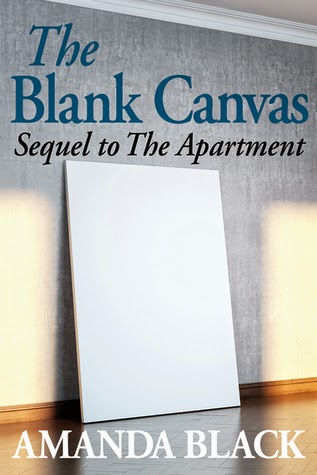 Note: This ebook was provided by Full Fathom Five via NetGalley in exchange for an honest review.

The Blank Canvas is the second book in The Apartment Novels series by author Amanda Black and one that I've been itching to get my hands on ever since I had the pleasure of reading the first book less than a month and a half ago. I loved having requested and being approved to read and review the book on the very day it was released, though it was close to midnight already on my end, and I got through the whole thing in one sitting. You know how you anticipate the release of a book in a series and then it ends up not meeting your expectations? Well, The Blank Canvas didn't meet my expectations; it EXCEEDED them! ^.^

Two people very much in love. When the truth about their identities and circumstances are revealed, they both decide it's time to do the right thing. One stays to fight for what they have, the other leaves. The former finally decides to do something for themselves, a choice not really out of selfishness but for a want for happiness. The latter finally decides to do something for someone else, a choice made out of selflessness for the first time in their life. Yet, they find no joy at this juncture of their love story. What was supposed to be a new beginning seemingly became an end that left them both miserable.

"Now she was the center of his universe...but how could he make her believe it?"

Ah, Ethan and Lily. If ever there were two lead characters who deserved a chance at a happily ever after, it would be these two. Ethan Foster spent a decade with a woman who made him feel as if he wasn't worthy of his family's love and used him for his talent and money. On the other hand, Lily Blake has taken care of everyone else around her, putting her own needs on hold. When these two met in the first book, you just knew that they would end up becoming each other's world. There was just something about each of them that drew them into what may be considered an unconventional relationship, but even without the names and information, it really was a give and take affair that developed into something more.

When Ethan left at the end of book one, my heart broke for Lily and now, learning the reasons behind Ethan's decision, my heart broke for him as well. And once again, I found myself rooting for these two. I went into this sequel having my own preconceived ideas of what would happen and when they didn't, I was actually pleasantly surprised. Why? Because the author took the story in a direction that I wasn't expecting and in a way that made me fully appreciate just how unique a love story Ethan and Lily had. Reading this book made me fall in love with them all over again.

The Blank Canvas feels like a second chance romance because that's exactly what the two lead characters had before them--a second chance at their love story. In some ways, it's like reading about two people falling in love for the first time and experiencing everything for the first time: the courtship, the wooing, etc., something Ethan and Lily didn't go through in The Apartment. In others, it's a continuation of a love story that was never meant to end. If anything, these books have confirmed that I am now truly a fan of Amanda Black's.

And speaking of ends, there's a surprise at the end of the book that had me grinning from ear to ear when I saw it. ^.^ However, I shall end this particular review by giving this beautiful love story five stars and will highly recommend it to my fellow bookaholics. Just remember to read the first book before diving into this one so that you don't get lost. Both books are so worth the time you'll put into them. This one joins the first on my list of favorite reads for the year. ♥

Grab a copy of The Blank Canvas on Amazon | Barnes & Noble.