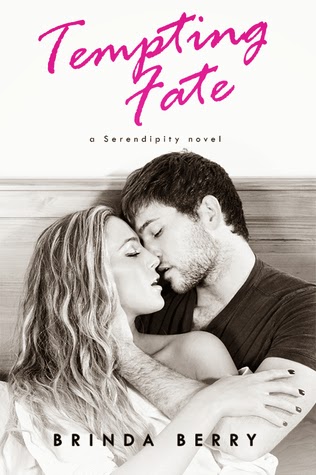 Tempting Fate is the second book in the Serendipity series by author Brinda Berry. For those who were able to read the first book in the series, you'll remember Collin Cordova, Malerie Toombs' partner in their music podcasts. I'm glad that Collin gets his story told in the second installment because he was definitely a supporting character from the book prior that piqued my interest. Here he meets Veronica Marshall who, just like with Malerie and her counterpart Ace Sloan, bumps into him, only this time with her car rear-ending his.


After graduating from college, Collin has moved to from his hometown of Chicago to St. Louis, away from his family and ex-fiancée and taking charge of his life, pursuing his own hopes and dreams. When Veronica crashes her car into his, he never expects that a simple accident on the road would lead him to wanting to help this nineteen-year-old girl who may be beautiful on the outside but is very much broken on the inside. However, it's difficult for Veronica to accept help from others, automatically labeling it as charity, but being around Collin teaches her that there are actually nice people in the world not expecting anything in return.

Veronica's bruises and skittish behavior raise red flags and Collin notices them immediately. Still, she's very hesitant when it comes to sharing her past and while she does begin to trust Collin, she's also afraid that getting too close to him may endanger his life, no thanks to her abusive ex-boyfriend. Knowing what her ex is capable of is what led her to run away from Shelby City, hoping to prevent him from hurting her step-brother and his best friend. The thing is, the past always has a way of catching up, especially just when you're ready to face a future with someone else.

Tempting Fate was an enjoyable read and while it did take me awhile to warm up to Veronica, she and Collin did have the chemistry readers want in their two lead characters. Collin's past reminds me of Ace's from book one, in that neither was explored too deeply, with just bits and pieces of information that give you a basic idea of what their home life must have been like but leaving you wishing there was more. Again, I'm glad that the love story didn't progress too quickly and that the characters were allowed enough time to establish some sort of foundation before delving into the romance aspect. All in all, this was a good book and I'm happily giving it four stars out of five. ♥

Grab a copy of Tempting Fate and Ms. Berry's other books on Amazon | Barnes & Noble.