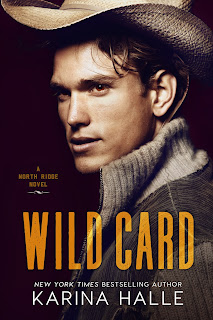 Bestselling author Karina Halle's new romance series, North Ridge, is set in Canada and features the three Nelson brothers--Fox, John, and Shane--and their stories about family, career, and love. She kicks things off with Wild Card, a second-chance love story involving the youngest among the brothers, twenty-six-year-old Shane, and Rachel Waters, also twenty-six and the love of Shane's life as well as the girl who got away six years prior. Shane was always Rachel's reason to stay in North Ridge, but when he breaks her heart, she goes off to Toronto in order to pursue her other dreams. She has a thriving career in advertising and Shane is in charge of the family-owned Ravenswood Ranch. If Rachel had her way, she would never have returned to the town that held bittersweet memories. She's built a life of her own, one that includes a good job, great friends, and a boyfriend she cares about. But all it takes is one phone call regarding her mother's health and she's back in North Ridge, a fact that has Shane wondering if this could be his long-awaited shot to prove to Rachel he's one wild card worth going all in on.

This series starter felt like such a departure from the author's usual fictional fare, what with its setting that gives this a rural feel, but it still is quintessential Halle. She has once again come up with a story that's worth reading, and with it being the first in a series, it makes me want to read the stories of Shane's older brothers, Fox and John (better known by his nickname of Maverick). As is often the case with one pushing the other away, Shane had his reasons, but I won't go into it in this review because I know it'll end up being a major spoiler. Suffice it to say that it was a big enough reason for Shane to do what he did, even he knew that it would mean Rachel leaving. We're able to get glimpses of the evolution of Shane and Rachel's relationships--from when they meet as children to them falling in love as teenagers and then knowing that no one else will ever compare until they get to when everything fell apart. As much as this book is about love lost and found, it's also about family and how adversity can bring everyone closer together. With Wild Card, which gets 4.5 stars, expectations will be high for books two and three. ♥