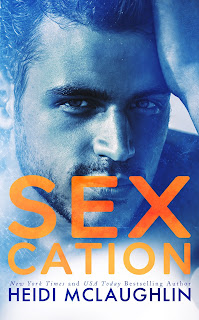 A no-strings, anonymous tryst while on holiday is exactly what Story Cavanah needs. Well, at least that's what her best friend has recommended she do right before she goes on vacation and Bermuda is the kind of place where Story feels like she can let loose and simply be. When she meets Jackson Collins, they come up with a plan to pretend to be the British husband and the American wife, exchanging nothing more than made-up names in order to maintain anonymity, and to walk away at the end of their time together. Story tells him her name is Jade, while Jackson gives his actual first name. It was supposed to be a seven-day affair, but it didn't take long for either one of them to feel like this was more. But walk away they did. Only they were meant to meet again, and when they do, Jackson knows he isn't about to squander his shot, but Story is feeling unsure what it is she truly wants from him.

Sexcation is a standalone romance from Heidi McLaughlin and it was a fairly lighthearted read, more sweet than steamy and a book I was able to finish in two hours. Jackson and Story had a connection from the beginning, and the idea of engaging in a no-strings affair in Bermuda sounded like the very thing they both wanted and needed. After all, their respective lives were in transition and I did mostly like how everything transpired while they were together in the first half of the book. Things kind of faltered when they returned to the "real world", and I certainly wasn't a fan of how Story treated Jackson after she learned that he was Jay Collins and that his family and hers had one particular thing in common and it was the one thing she couldn't stand. The girl had issues and I felt Jackson shouldn't have wasted his time with how wishy-washy she was. All things considered, I'm giving Sexcation 3.5 stars. ♥