Review: Remember When by SJD Peterson 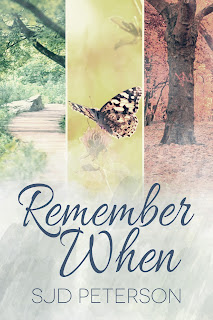 SJD Peterson is an author who's been on my must-check-out authors for a couple of years or so, and I've even bought a couple of her books on Dreamspinner Press's website. However, it's her most recent release, the second-chance, friends-to-lovers romance Remember When, that became my official first read. It inspired a variety of thoughts and emotions as well as a range of reactions that went from fascinated to frustrated to fulfilled. When an author and their story are able to evoke all of that from me? Well, consider it a good thing and this book was good.

Nelson Maitland and Lucas Rollins are the best of friends and in the summer of 1988, their thirteen-year-old curiosity has them engaging in some sexual exploration. When Luke's family moves across the country, Luke and Nelson make promises to stay in touch, but life goes on and so do they. A decade later, fate has their paths crossing at an airport and it isn't only their friendship that's rekindled but their mutual attraction as well. Just when they think this is their chance to be together, fate intervenes again, forcing them apart. Is this the end or merely another pause in their story? When fate steps in once more, will the third time prove to be the charm or closure?

Ah, Nelson and Luke. Nelson was gay and was in love with his best friend growing up while Luke only embraced his bisexuality as an adult. Fate proves to be both an ally and an adversary, pulling them together only to push them apart later on. I felt for these two when they had no choice but to separate when they were teens, and then my heart broke when choices that were made led to so much being taken away from them, but most specially Nelson. Because I already mentioned that there is a third part to their story, I will say that it takes seventeen years for their paths to cross again, but I'll leave it at that. You'll need to read the book to find out why they separated and what happens when they meet once again. To even hint would seriously spoil it for those who have yet to read the book.

I loved Nelson. He persevered in the face of everything that came his way, whether it be a failed relationship or the fear of rejection from his parents when the time came for him to tell them he was gay or even moving from an unfulfilling job to pursuing his dream of opening a bakery. With Luke, though, I had more of a love-hate thing going on. I had no doubt that he loved Nelson as much as Nelson loved him; however, what he did at the end of the second part ticked me off immensely. It was cowardly and I have such an aversion when it comes to those taking away someone's ability to decide for themselves. Sigh. He does manage to win my affections back, though it did take me longer to get there than other people in the book. Let me just say this: the book does have a happy ending. My one complaint? I wanted a confirmation that the name "Nellie" was in honor of Nelson. Maybe that's just wishful thinking on my part, but come on! It's so obvious that's where it came from. Right? Sigh again. if you're looking for a book that'll reinforce the belief that true love prevails, get your hands on Remember When. Five stars. ♥