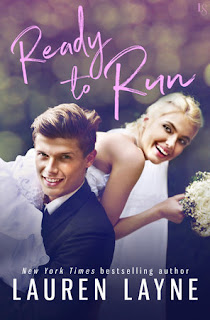 We've all heard about runaway brides, but how about turning the spotlight on runaway grooms? Well, bestselling author Lauren Layne's new series, I Do, I Don't, is doing exactly that and she starts things off quite nicely with Ready to Run. Tasked to find the perfect first ever runaway groom for a brand new reality show called JIlted, Jordan Carpenter flies all the way from New York to Montana in hopes of doing the very thing her persistent emails and messages have yet to do: get firefighter Luke Elliott to sign on the dotted line. She's got an aversion to small towns, but she's pretty sure she won't have to stay in Lucky Hollow that long once Luke sees agreeing to be on the show would be a win-win. I guess Jordan didn't count on Luke saying "no"--repeatedly. He doesn't need anyone poking through his past. Whatever failed relationships he's had are in the past for a reason and the last thing he needs is to start stirring that all up again for ratings. Luke just wants Jordan to go back to New York...but  there's something about the city girl that has him wanting to pull her closer rather than push her further away. If only she'd let him.

This city girl falling for a country boy story struck a good balance between the romance and the comedy. Jordan is tenacious and being refused time and again by Luke makes her dig in her high heels until she gets what she wants. Of course, what she wants changes from getting him to become their runaway groom turned bachelor looking for his bride to something she never expected. There's a reason why she's not a fan of small towns and that's part of what makes her interesting. On the other hand, Luke isn't your typical guy with three cancelled weddings. When you learn why each of those nuptials never pushed through, you'll get why I think he's such an intriguing main character. Now, I'm a fan of stories with a good cast of supporting characters backing it up, and this series starter certainly has that. The unique thing about this is that I don't think they're going to be recurring characters, not with the way the second book in the series sounds. I could be wrong, but that's what I got while checking out the blurbs for books two and three. Fingers crossed they'll both be as good as Ready to Run, which garners four stars. ♥